Day 5 of Thessaloniki city bus strike, is any help on the way? 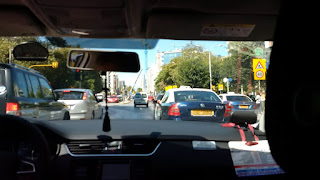 I go online to get my news here in Naousa -- no TV at home! -- but I obviously need to do a better job. When I arrived at the Thessaloniki bus station Saturday AM, there was no #12 bus waiting to take me to my destination. Not a single city bus in sight. The drivers were on strike -- a good thing for taxis, even though the 23-year-old driving me did not not see the situation that way. "Rather not get a ride than benefit from others' misery." They call that "filotimo" here.
2300 bus drivers are not so sympathetic, as they have not been paid for July or August. The bus company is privately held, but receives a per passenger subsidy from the government which I heard had been cut.  The matter is apparently in the courts. Mayor Ioannis Boutaris is stuck between a rock and a hard place. Here hard to know anything for sure, that's how complicated and depressed things are. ‎
Sunday being the last day of the 81st Thessaloniki International Fair‎, city officials put some buses into circulation. Traffic was a mess. Thankfully I was in the village of Koimisis, near Serres. Nice long, quiet walk around town Sunday night -- which is one reason why I love villages. Women were chatting at a gyro sandwich place. Men were quietly watching a soccer match on TV. But Monday it was back to reality, and the strike continues.
Thessaloniki is a town of a half million people. It's not clear what tomorrow will bring for working people and students struggling to get places. ‎Who wants to drive their own car with gas at about $6 a gallon? Thursday and Friday the ferries will also be on strike, while the Shipping Ministry is deploying a vessel to Lesvos to provide housing for some of the migrants again homeless after a bad fire in an overcrowded hot spot. Many Greeks meanwhile are not taking kindly to the assimilation of so many foreign kids into the already stressed public school system. There are still over 60,000 refugees in Greece, including 20K unaccompanied children. ‎ Prime Minister Tsipras just made his case at he UN, but will anything immediately tangible come of it?
Oh, did I mention that the Egnatia Road -- one of Greece's biggest and newest highways, which cost 6.5 billion Euros to build & has 50 million Euros in annual revenues -- is on sale for 100 million Euros? It's part of the deal with the infamous Creditors. ‎ Nothing big financially can happen without permission from THEM...not even, I might add, promises made by the New Democracy opposition party a few days ago.
Maybe those Creditors can get Thessaloniki buses running again, if you know what I mean. Why not?
Sent from my BlackBerry 10 smartphone on the Verizon Wireless 4G LTE network.
Posted by Paula at 6:16 PM No comments:

Lekani, village of refugees also in need of Family Trees!

(NOTE: Clean-up/repairs are well underway in flash flood impacted villages. And people are abuzz analyzing Prime Minister Tsipras's annual address Saturday night opening the 81st Thessaloniki International Fair. He said, amongst other things, that: there is light at the end of the tunnel, thousands more doctors/nurses will be added to the nation's hospitals, and the Thessaloniki Metro would be done soon...But is there now another EU loan crisis on the horizon?)
Per my previous post I made the bus to Lekani, Kavalas, but it was packed...and my hostesses were waiting as planned in the town square to show me a good time. (I just continue to wonder how exactly I earned VIP treatment every time I visit Girls School graduates 45 years or so later. But I digress...)

Many have noted that the Greek people have been amazingly kind to the Syrian refugees even as they are in dire straights financially. It's because many come from refugee families -- especially during the Exchange of Populations in 1922. Lekani was a Turkish Village, so the Turks went to modern Turkey (remnant of the Ottoman Empire) and Greeks in Turkey came to Greece‎. Many were Pontian people from the Black Sea area. Sofia Makridhou's father came from Trapezounda when he was 7. She herself spent 15 years working in Cologne, Germany, after graduating in 1970.  Then back in Thessaloniki as a single parent, Sofia worked for 24 years in a hospital taking food trays to the patients. Stability is a hard-won attribute in these parts, but resilience is rampant.
‎ 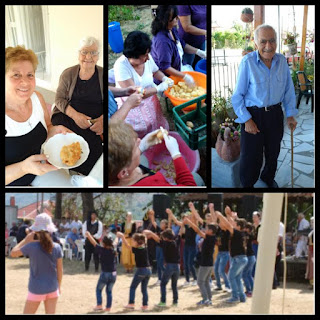 Currently only a few hundred people live in Lekani full-time, where the mai‎n crop is potatoes -- and like many places, the younger people have left and visit during the summer or special holidays. Another Girls School grad said her grandfather was a teacher; there were then over 500 kids in the grammar school, many speaking only the Pontian dialect and trying to learn Greek.  It was recently reported that 1.5 million Greeks have left the country since the financial crisis began, the "brain drain" (in English!) frequently referenced as seriously hampering economic development.


On the September 4th, Lekani celebrated it's annual "Potato Festival," created some years back to bring people to the village to both eat and buy potatoes (10 kilo bag for 6 EU) -- and to celebrate the Pontian Heritage, which goes back to the Ancient Greeks. I was blown away not by just the dances -- my absolute favorites! -- but by the town's junior dance group. They were totally amazing, right down to the 5-year-olds at the end of the line. It was a very good day.
At lunch with the Makridhous, I started on the topic of Family Trees and how much I lamented not having asked my grandparents the salient questions. At which point, Sofia's mother Zoi ("Life") -- who had pictures from my 1969 visit stashed in her plastic photo box -- chimed in, "I didn't ask my parents/grandparents those questions either."  More information lost!


Ask those questions of your parents/grandparents immediately and write the names‎ of your ancestors down for your kids and grandkids...have I said this before?


Sent from my BlackBerry 10 smartphone on the Verizon Wireless 4G LTE network. 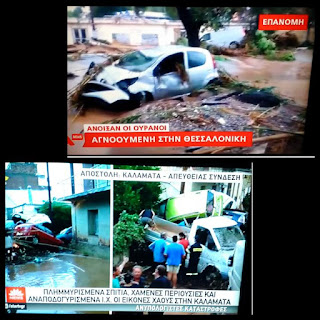 Was planning to update my blog w/details from my beautiful weekend in the two villages of Lekani and Platamon NE of Kavala. Maybe later...
Came down to Thessaloniki for a few errands, only to be greeted by heavy rains all night that caused havoc and disaster in many parts of Greece -- especially very near here along Thermaiko Bay ‎(ie. Ag. Triadha, Epanomi, Mihaniona) and also in the Peloponnesos, with havoc of "biblical" proportions reported in and around Kalamata.  So far 4 casualties -- and many homes, roads, towns/villages in ruin. Mud everywhere, cars floating out to sea, people in shock...
Keep in mind that the Greek people suffered yet another pension cut just last week along w/announcements of increased taxes/fees. School is supposed to start on Monday. Many have now gone from distraught to furious, as there appeared to be a (predictable) lack of services on top of everything else.  ‎Spent the morning checking in with friends/relatives -- some of you might want to do the same.
When are these people going to catch a break???
Sent from my BlackBerry 10 smartphone on the Verizon Wireless 4G LTE network.
Posted by Paula at 1:59 PM No comments:

On my way to Lekani to eat potatoes!

Speeding now towards Kavala on a Friday morning after making the 7:20 am bus from Naousa to Thessaloniki. No time between buses for a bathroom break, so let's hope for the best...
After 10 days getting settled in my studio apartment, kinda glad to be taking a trip -- the cleaning and shopping were getting to me, resulting in a cold I can't quite shake. First you sweat, then you cool off in a breeze or with a fan, and the result is multiple boxes of ComtrexCOLD...with each pharmacist suggesting a differing dosage.  Oy!
Have spent time exploring Naousa/listening to people, and today seems to be yet another day of reckoning when people go to the bank to see how much has been cut from their pensions this time. No end to the economic misery here...But now I am on my way to a quasi-remote village -- 2 buses a week! -- northeast of Kavala‎ named Lekani. We had 3 Girls School students from there, and I remember a charming place.  Now none of the "girls" live there full-time.
When we got together for our big Reunion last April, I expressed an interest in going back to their village‎, which has a "Potato Festival" first weekend in September -- not that potatoes are on my diet of moderation (which is going pretty well so far). So about a week ago, we made a plan to meet in their home village, sniffles be damned. A last-minute check of the Weather Channel revealed temps around 75/50 F there coming days. Should be happy to escape the heat, but I have this damn (secret) cold. And with my heavier clothes still stashed in Thessaloniki, I didn't even pack a sweater (really?). But I do have my trusty Thea Lib Jean jacket to keep me warm...and just hope the one 1:30 pm bus isn't  sold out!
To be continued -- but while I'm eating potatoes in Lekani, you all have a great ‎ Labor Day Weekend!
Sent from my BlackBerry 10 smartphone on the Verizon Wireless 4G LTE network.