Inspiration from an 89-year-old Naousa Facebooker! 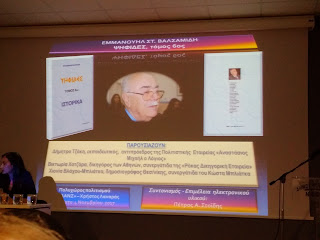 Sometimes a writer needs inspiration, especially when wondering if a book in my head will ever make it to the printed page...I recently got a big dose  of that in my Greek hometown of Naousa when getting to know more about  Manolis Valsamides, a legendary local historian who has written 23 books. His latest, Psifidhes  Istorika Vol. 6, was unveiled at a packed public event  that not only inspired me, but gave me new insight into the Naousa psyche.
"The Heroic Town of Naousa" is a fascinating place located just below the ski line and bifurcated by the ever-downward-rushing Arapitsa River. The town was officially designated  "Heroic" by King Paul in 1955 in recognition of all-out efforts to gain independence from the Turks in 1822 -- an uprising that resulted in Naousa being burned to the ground, but which also taxed Turkish forces so much as to facilitate the independence of Greece in the Peloponnesus. Only the small Profit Ilias church and three people survived that watershed event. Then, the rebuild from scratch.
For a town of only 23,000 people, Naousa is surprisingly flush with activity: an indoor and outdoor theater, a first class ski venue with its history of local winter Olympians, lectures/seminars/book readings, an indoor swimming facility adjacent to the renown St. Nicholas Grove (with its tennis courts), music events of all shapes/sizes, a large movie theater, numerous traditional organizations/dance groups, and the historic Carnival tradition which lasts about 2 weeks...not to mention being ground zero for the fabled Xinomavro grape and 19 area wineries.
But Naousa also seems to have a few chips on her august shoulders.
This I understood better when presenters for the Valsamides book emphasized the detailed recounting of Naousa's "heroic" times as information that some had not been totally aware of. They expressed wonder at Mr. Manolis' prodigious output, but focused on the fact that this chunk of Naousa history has not been written about as much as the stories of the independence movement/heroes from southern Greece -- where, in fact, some of the Naousa freedom-fighters escaped to in 1822 to became heroes yet again. Naousa simply didn't have chroniclers like Lord Byron and Kostis Palamas, so she was kind of left out of the historical narrative. That had been deemed an "injustice."
Valsamides' newest book helps right that wrong. He described his book as both "a product and a dialogue." For the grand finale he shared the news that in 1932 a journalist had interviewed a nun purported to be the 110-year-old daughter of Naousa freedom-fighter Dimitrios Tsamis Karatasou. The crowd was stunned...but no more stunned than I upon hearing that "Kyrios Manolis" at 89 is Internet savvy with a Facebook page. I immediately ran home and friended him. Very soon thereafter he both accepted and answered my questions on the nun story!
About 10 days later, Manolis Valsamides posted a lengthy and rather urgent request for help researching the above matter -- for people to look for various Thessaloniki newspaper articles for the period 1931-1940. "This is a difficult topic," he wrote. "It needs deep research, so we can find facts that can be cross-checked...Every bit of help is welcome. Search!" This from a historian who was not going off half-cocked because he was on to something. He will be satisfied only when he has proven facts worthy of his next book.
Now, that's inspiration.
Posted by Paula at 12:02 AM 2 comments: