The must-see National Hellenic Museum ("The Newest Thing in Ancient History") -- where I am sitting right now -- is located at 333 S. Halsted St in Chicago's Greektown. The wonderful 4-story building (with it's amazing views from the terrace) has been open about a year-and-a-half. The library is pretty neat and welcomes materials from Greek-American communities around the country. And there is an oral history section. I'm impressed! 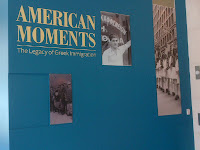 Current fabulous exhibits include "American Moments: The Legacy of Greek Immigration" (every Greek-American will relate!) and "The Holocaust in Greece." There's more to see; check the website nationalhellenicmuseum.org for more info and to join. Spread the word, while I visit the gift shop :)

Sent from my Verizon Wireless BlackBerry
Posted by Paula at 4:03 PM No comments:

All roads lead to Koroni -- seriously!

It would be good enough just to eat a meal  at my favorite Chicago Greek restaurant, Rodytis -- and chat with Jimmy the Manager, whom I've known for about 10 years.

This time a little more chatting lead to the inevitable, "Where is your family from?" When I mentioned Koroni, he basically said: "I'm from Messinia and my aunts were nuns in the convent  above Koroni for 40+ years." Yes, that very same convent started by a monk related to Yiayia Sarris and which she wanted to join. He got his other aunt Stamata (now in Chicago) on the phone for a chat. She was glad to hear that the convent -- which has undergone some turmoil -- is open, so she can go visit again. Jimmy said I made her day, but he made mine!

Jimmy Kalogeropoulos (from Loutro) lights a candle at the convent every time his goes to Greece. He said he'd like to take me around Messinia if we are there same time. After this conversation, who knows?

Sent from my Verizon Wireless BlackBerry
Posted by Paula at 3:00 PM No comments: 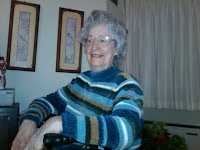 I was so sad to hear that Georgia Metaxas died early this morning. She was one of my favorite people -- and 96-years-old, so maybe I shouldn't have been so shocked. But she was still pretty amazing, and, according to my Thea Libby and her neighbor/dining buddy at Rio Las Palmas, she had wanted to make it to 100.  Georgia passed rather suddenly, so that is a good thing.

My friend Georgia was a stalwart in the Stockton Greek-American community -- a seamstress par excellence who lived for many years on W. Alpine, not far from Gaines Market and our own house on W. Sonoma.  Her late brother Jerry worked at the S&G Market on South El Dorado, and another brother Nick (and Bella's) son George is my parents' godson. Lots of history there. I simply can't remember a time when I did not know Georgia Metaxas. 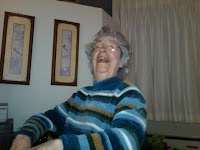 She was sharper than a tack right up until the end-- and whenever I was seeking some historical information in recent years, I was always told, "Ask Georgia Metaxas." And I did.

I last saw Georgia when we visited with her on her 96th birthday last year, on the day after Christmas. We had planned to get her some of her favorite raviolis from DeVinci's, but they were closed (for some reason) -- so she had to make do with donuts with strawberry filling from Krispy Kreme. Her niece Phyllis came by, too.  We hung out and laughed.

My Thea Libby is really going to miss Georgia. So am I.

Today on the Fourth of July there is much to think about. And much to be grateful for, even though it is sometimes difficult to ascertain who is better off or who is doing what to whom...

Recently in China, a new law was enacted compelling adult children to visit aging parents abandoned in villages -- facing up to the complexities of the industrialized world with its big city migrations and pandemic erosion of cultural values. Rewritten classic Chinese texts tell children to buy health insurance for their parents and teach them to use the Internet!

Greece, a much smaller country, is another story. More people may well be moving back to their villages to escape rents and other costs associated with city living until the dire economic situation really turns around.  The problem is a corrupt political system that the average citizen is now paying for in the extreme, making family ties even tighter.

Here in the USA, Greek-Americans have  maintained -- for the most part, so far  -- the same family ties forged by our forefathers not so long ago. Time will tell if those ties/values, including cultural/hometown loyalties and a strong work ethic, will survive in the future. It's up to us.

One way to do that is to preserve family histories -- including stories, documents, photos, other heirlooms -- and to celebrate them.  It is important that we do so with accuracy, by writing things down and even recording stories and voices.  I wish I had thought of that while my grandparents and parents were still alive, but it's not too later for others in Stockton and every Greek community to diligently do so. Indeed, the Greek Historical Society of the SF Bay Area (headed by Jim Lucas) meets every month and includes one recorded interview for those purposes. 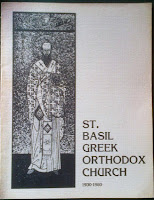 St. Basil's Church published a 68-page book in 1980 for its 50th Anniversary. There is a lot of great information about the history of the church and the Greek Community that grew up around it. Great pictures, too, but precious few details as to who is pictured. Take Page 19 for example, where an image is identified as "Father Kouklakis following a baptism."  I see my Yiayia Sarris holding a baby, standing next to Mrs. Sperry. Has to be in 1950-52, but whose baptism is it? Who are the others in the picture?

Maybe there simply wasn't enough room to print more details then, but we can revisit the book now...Can you help write more detailed captions for photos in that book?  Do you have other family photos that trace the history of the Greek Community in Stockton to share? I will be asking you to help put together photos and information that can be a lasting, more accurate history for Stockton Greek-Americans to build on when I see you in September.  Start looking, please.

Meanwhile, "Hronia Polla" for the United States of America and the democracy it's built on. That's a Greek word, you know. Just ask Mr. Gus Portokalos.
Posted by Paula at 4:36 PM No comments: