"No, I am not an enemy of the people" (a Greek story of reunification and quasi-redemption)

Sticky wicket might well describe the role of communism in Greek history -- as the promises of the Bolshevik Revolution crept into the consciousness of the working man, captivated some, but  fell  down during a crushing Civil War following WWII.  In Naousa, bitterness and mistrust  still  simmer under the cover of normalcy. But little-by-little, lost facts/secrets are being uncovered and confronted...occasionally by people seeking their roots.

So when I heard that a book entitled No, I am not an enemy of the people was going to be presented at the Naousa cultural center a few weeks ago, I immediately assumed that the reference was to the Greek people with some sort of apologia for someone who had simply been castigated as a Communist.  But it was a human story much more complicated than that. 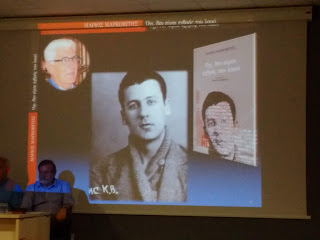 Markos Markovitis was born in Naousa in 1905, the eldest of 9 children in a relatively prosperous family. He was not alone in falling under the spell of the communist promise. But by 1925 and with a messianic fervor, he was one of the movement's hard core evangelists in Thessaloniki, where he was arrested and condemned to death in 1931. Managing to escape, he went to Russia, the Communist "Fatherland." There he studied, married, and tried mightily to become a citizen. But in 1937, it all came apart for Markos. He was arrested in a Stalinist purge and condemned to death as an enemy of the state -- prompting the writing of two poignant letters to Stalin. 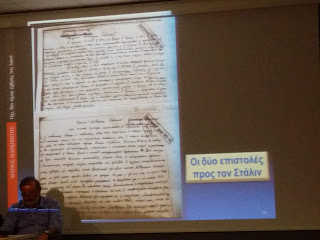 "No, I am not an enemy of the people,"  Markovitis wrote to convince Stalin that he was dedicated to the Communist cause. That he had come to Russia full of joy and hope to serve Stalin and the State. That he wanted to stay and live out his dreams. But those letters were never read by Stalin. Markos was executed and buried unceremoniously in a mass grave. Meanwhile, his family in Greece had long lost track of him.

In Russia he had a new family, with children. After the execution, that family  disappeared  itself in order to survive -- his children going into orphanages under assumed names. It wasn't until 1957 that the KKE (Greek Communist Party) learned of Markovitis's fate, but his family was not informed until 2002. By then his parents had died and other relatives ("down to the last cousin") had also been hounded and stigmatized as Communist sympathizers -- all due to a lost son of Naousa who had died in Russia 80 years ago as a suspected traitor to the Communist cause!
Enter Markovitis's grandson Dimitris, whose search for the real Markos Markovitis led to the discovery of the two letters in Russian archives -- bringing him into contact with his family in Greece and with Marios Markovitis, nephew of Markos and the author of the aforementioned book..a labor of love with a double meaning in terms of political consequence and historical perspective.

The room for the book reading was full and captivated, especially by the author whose closing comments were so very powerful on several levels: Markos Markovitis,  he  declared, died twice in 1937 when he was executed and, even worse, disappeared as a person -- and now in 2018 the truth comes out and "we can mourn him properly."  He named others who had suffered much the same fate.


Why did it take so long to find and publicly talk about Markos Markovitis? Because "history is written by the victors," as you may have heard before.  But in Greece, victors have been few and far between.


NOTE: In Greece, as in many parts of Europe, the Communist Party is a legal/viable, if not particularly successful, political party. Indeed  the KKE in Naousa recently staged a public event to celebrate the 100th anniversary of the Bolshevik Revolution. But a certain kind  of  paranoia/hostility abides due to that Civil War which fully impacted Naousa -- and where a pipeline for Communist abduction of young people literally ran down Andarton, the street where my father grew up so many years before.
Posted by Paula at 10:45 AM No comments: