The Game-Changing Salonika/Thessaloniki Fire of 1917

Ever wonder why Thessaloniki is such a beautiful, well-ordered Greek city in comparison to the helter-skelter, traffic-choked capital Athens? 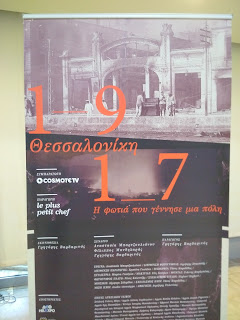 While trying to come to grips with devastating hurricanes and earthquakes, I saw a jarring yet uplifting 60-minute film entitled "Thessaloniki1917, the fire that birthed a city." It showed with amazing documentation -- moving pictures, photos and testimony -- how a good part of the city burned down 100 years ago and was then re-imagined/rebuilt. Not, of course, before many residents suffered great loss and displacement. Sound familiar?
I had learned at the Thessaloniki Jewish Museum that the fire had decimated the Jewish community, but it was more complicated than that.‎ In August1917, a bustling "Salonika" -- as Thessaloniki was then known -- had about 158,000 residents, mostly Jews.  She was a diverse commercial hub only recently freed from the Ottoman Turks, basically under French command, and hosting 200-300,000 French etc. troops.  It was very dry at the time, and as food was cooked over open flames there were frequent fires‎. The troop encampments to the west of the city consumed a lot of the available water.
An initial small fire spawned a 3-day nightmare waiting to happen, with huge flames spreading while people watched in disbelief from various vantage points. The Vardari wind turned those flames southward, and suddenly the restaurants and hotels quayside were also burning. People were running everywhere along very narrow streets trying to save themselves and a few belongings. Slow to respond, the French forces did too little too late‎.
75,000 people were rendered homeless: 54,000 Jews (many of whom emigrated to France and Palestine), 11,000 Muslims, and 10,000 Christians. 16 synagogues were lost along with 12 mosques and 3 churches. ‎Gone were the market areas at the city's core and most of the historic eastside. 3 camps were set up, and 20,000 people lived in tents while many elders perished. Message to the outside world: "Old Salonika Finished!"
Enter Prime Minister Eleftherios Venizelos, who had a very soft spot in his heart for Salonika.‎ Three months after the fire he went to work on a plan for rebuilding the city, to be followed by a succession of leaders/planners that created the new Thessaloniki -- but not before more synagogues came down and small businesses were closed. Deeds for property were sold at open auctions displacing more people. Add to that many, many refugees that poured in from Asia Minor in 1923. The rich took advantage of the poor, eliminating the middle class. Real people paid a price for progress.
Nevertheless, a new "Greek city" emerged, with a vertical axis north and south of Platia Aristotelous. Planner Hebrard saved the historic Ano Polis, while cross streets with marketplaces were included downtown to bring back the flavor of Old Salonika. The urban plan hatched in the ashes of 1917 became the Thessaloniki  of today -- and the envy of many in that the main square opens down to the sea‎, the only large European city to do so.
That's why Thessalonik‎i is so beautiful and well-ordered -- because of the Game-Changing Fire of 1917, a remarkable piece of history that seems too familiar as we watch destruction in the Caribbean, Florida and Mexico. And as everyone is asking, "What's next?"

Sent from my BlackBerry 10 smartphone.

Been too long since I had last attended the Thessaloniki International Fair. But what really caught my attention was this year's "honored country," China...especially after reading the NYT article "Chastised by E.U., a Resentful Greece Embraces China's Cash and Interests" updated online August 27th, the day I came back to Greece. You can say what you want about leftwing PM Alexis Tsipras -- who recently also organized a love fest in Athens with France's President Macron -- but he's no capitalist slouch! 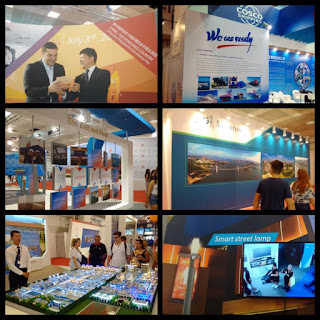 The Fair (since 1926, minus time-outs for war) is basically a trade fair, with many interesting pavilions which run the gamut. Let's just say that I tasted a lot of cheese from Crete. Also saw a jarring 1-hour movie titled "Thessaloniki 1917: The fire that birthed a city." An, of course, I LOVED the Nescafe "Frappe Museum" -- the frappe having been (accidentally) invented at the 1957 Fair. Lucky to stumble upon the fascinating radio museum as I was exiting. But I was most curious about Pavilion #13.
The Chinese seemed to have spared no expense to put their best industrial/technological foot forward (see photos), in a country that they consider a linchpin of their "One Belt, One Road" economic campaign to move into Europe and anywhere else they can.  Proof of that is their moves on the Port of Piraeus, where COSCO Shipping has invested heavily since 2008. By 2016, COSCO owned 51 percent of the Piraeus Port Authority, transforming it into the busiest Mediterranean port.  Another big-time (currently stalled) investment revolves around the development of the former Athens Ellinikon Airport property. Lots of serious -- some say practically neo-colonialistic, for better or worse -- Chinese business in a country trying to become solvent again.
Tsipras had opposed the port's privatization when he was elected in 2015 -- but in the face of tortuous and unrelenting EU austerity measures, he chose to be nice and deal with a country throwing money, modernization and progress Greece's way since the beginning of the financial crisis in 2008. In return, Greece has been China's political friend when it counted, even casting questionable EU vetos -- and causing Europeans to complain that Greece is abandoning it European alliances.
You must ‎ read that NYT article for a thorough report on 10 years of Greece-China economic/political relations. Therein, a prominent Dutch EU Parliament member is quoted as saying that "...the EU‎ is not only a market, but first and foremost a community of values." Really?


Costas Douzinas (head of the Greek Parliament's foreign affairs and defense committee) said this: "If you're down and ‎and someone slaps you and someone else gives you an alm, when you can do something in return, who will you help, the one who helped you or the one who slapped you?"
Game on!
NOTE: Last year's "honored country," much to my dismay, was Russia. Indeed Barack Obama visited Greece after last year's election primarily because of fears that Putin was gaining ‎too much traction here. If there was a Russian display of any kind this time, I didn't run into it. Hacking, fake news, and sports doping do not, after all, put food on Greek tables.

Sent from my BlackBerry 10 smartphone.
Posted by Paula at 6:45 AM No comments:

"Any news from your friends in Miami?"

Been a couple of days now since I have stopped obsessing about Hurricane Irma with all-night Internet binges trying to get news from Miami. Some brief relief came with a Stockton Record article ("Thousands get their Greek on at popular festival") reporting on the 58th St.Basil's Greek Festival -- and with a picture of good friend Gayle Maduros continuing my mom's legacy of quality control in the sweets department :)
Meanwhile my friends here in Greece were asking me daily‎ if I had any news from my friends in Miami. They had been watching  with horror the destruction being wreaked by the giant "typhonas." No storms like that here -- even though Climate Change brought one of the coldest winters on record throughout Greece last year and searing heat all summer.  And Greeks are well-aware of what President Trump thinks about Climate Change. (I totally HATE being asked about Donald Trump!)
On the one hand, I was lucky not to actually be in Miami going through all the preparation and angst associated with a Cat 5 hurricane.  Yes, I have been through a few hurricanes, but not the infamous Andrew. As I saw Irma develop, I was both terrified and feeling guilty about not being there.


Amazingly, I could tune into CBS4 Miami local news online -- but not without being forced to watch a VW ad at least 100 times. In the end it was a small price to pay for updates I could relate to, like rivers of water rushing down Brickell Avenue and the attempted looting of my favorite Publix on Biscayne and 17th Terrace. "Reality TV" made palatable only by no big wind damage in Miami as far as I could see...unless you count 3 downed cranes.


Devastation in the Keys was something else, largely unspeakable. Good Samaritans are collecting food and emergency supplies to drive down there if they can. The FL West Coast is much more flooded. Many places still have no electricity.  8 seniors perished in a Hollywood nursing home because of no AC.  There are continued curfews and boil water orders. Paradise lost on a grand scale.


And here I sit on a gorgeous Greek day in town of about 20,000 people in Macedonia, trying to digest what has happened a world away -- feeling safe and even happy to be in what is essentially a bankrupt country.  Thinking, too, that there is something not right with this picture.
‎But for now I'm just glad to have good news, in the realm, from Miami.