Think of Greek farmers when you next eat a peach or an apple!

Yes, think of Greek farmers, whose trials and tribulations these days are almost too many to bear.

Let's start with the epic storm that hit Northern Greece on July 10th. Galeforce winds of 60 mph came out of nowhere, leaving 7 dead and at least 100 injured in Chakidhiki, not far from Thessaloniki. Aftermath photos/videos of the village of Nea Playia remind us of hurricane damage we see somewhere in Florida every year. But for the Greeks it was not business as usual.

News of violent storms, floods, and earthquakes around the globe rarely takes us past damage photos and casualty reports. What happens down the line to real people who have to pick up the pieces literally and figuratively? For some farmers in Northern Greece, July 10th was a total disaster. 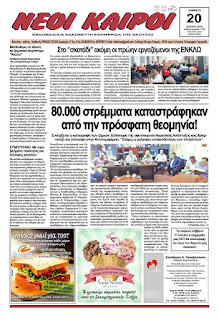 80.000 stremmata or 20,000 acres were devastated in the Nomos of Imathia alone which includes the municipalities Verria, Alexandreia and Naousa -- with a total of nearly 100,000 acres affected throughout N. Greece...Some families lost entire crops. The freak storm was preceded by 3 hailstorms in the Naousa area, damaging peaches, nectarines, cherries, apples and pears. Hail brings heartbreak and hard times for people, especially those who live in villages working their farms just like they have for decades.

On July 10th, entire trees were uprooted, greenhouses were destroyed, and irrigation systems were knocked out. It's a long road back as government compensation may not come till the end of the year when total losses can be analyzed by two agencies. Meanwhile farmers have to pay their bills, including insurances/fees and loans. Some farmers say that without immediate monetary aid they may have to throw in the towel. 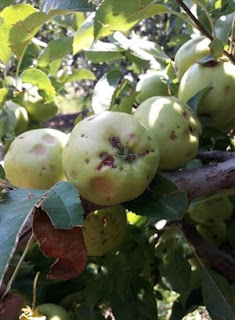 Many farmers already have, digging up trees to either plant something else or to just get out of the game. Climate change and the dreaded hailstorms too often make selling fruit for juice the only viable commercial option. Actual income from farm production is often poor and/or unreliable. It is not unusual for distributors or coops to pay late. I have met farmers who were waiting after a year to be paid or had not been paid at all...


And what about the ongoing EU Embargo against buying goods from Russia prompted by the 2014 annexation of Crimea and the retaliatory Russian sanctions against buying EU goods? At that time, Russia absorbed 90% of Greece's peach exports and 60% of the strawberries -- much of which then ended up rotting in trucks at the borders. 30% of all Greek agri-food exports had been going to Russia. Redirecting exports has been one solution, while another has been going through "middlemen" like the Eurasian Economic Commission. Flimsy, inadequate markets only add to the woes of Greek farmers who simply may not be able to sell what they grow, let alone make a profit.

The ongoing financial crisis has, of course, presented another set of problems. Approximately 1/2 million Greeks have left to find work in other countries, causing a serious "brain drain."  Greece has the highest unemployment rate in the EU at 17.6%. But a marked distaste for working in the fields -- especially by people under 30 (40% unemployment!) -- has caused farmers to rely on foreign workers, mainly from neighboring Albania...much as US farms depend on Mexican workers. Still, there is a farm labor shortage this year for critical jobs like thinning out the cling peach trees so that the fruit will be bigger.

So when you next eat a peach or an apple, think of Greek farmers. For some in the Naousa area, the freak July 10th storm may have been the straw that broke the camel's back.