Here I am in Thessaloniki trying to mind my own business, but how can I?  Just when it seems that things can't get worse, they do -- bringing Greece to a veritable "tipping point."

Greek farmers have called off the 68 highway blockades that have pretty much paralyzed this country for over a month, having accepted Prime Minister Tsipras' offer of legislation that does not come down so hard on the agricultural sector (assuming that "The Creditors" don't squawk). Said farmers were asked to share the multiple burdens facing their beleaguered country and are now in wait-and-see mode...That's the good news. 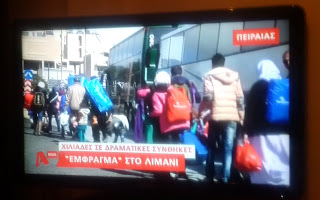 TV coverage is now focused on a refugee problem which has suddenly exploded way out-of-control. Today alone about 1500 more people arrived in Piraeus. Austria --an EU member! -- independently called a meeting with the Balkan countries but without Greece, resulting in border closures. Meanwhile, refugees continue to walk 550 kilometers (330 miles) from Athens to the Greek border, creating emergency conditions and stress all along the way.  Thousands who have reached the border are living in tents or on  the street, begging to cross over.

Forecasts for solving this double-edged humanitarian crisis are beyond gloomy: "In all likelihood,..Greece will be converted into a huge 'open-air' refugee camp with unforeseen political and social consequences." 50-70,000 people will soon be stranded in Greece if Europe doesn't get it's act together. "Hotspots" are indeed popping up like crazy -- and the Greek people are beginning to be torn between continuing to help their fellow human beings and resisting a situation that seriously threatens their survival.

How can anyone blame them? To add insult to injury, waves of hotel cancellations are hitting the super-important tourist trade. Chios (-60%), Kos (-36%) and Samos (-40%) are already feeling the pain. The tiny island of Kastelorizo -- 250 permanent inhabitants and one mile from Turkey -- last week absorbed 1000 people in 72 hours, adding to tensions with a neighbor whose provocations by land and by sea have brought NATO boats into the picture. Greeks are now actually asking the question: Could there be a war with Turkey?

It should be noted that the 3 top political factions (Siriza-Anel, Nea Democratia, and PASOK) seem to actually agree on refugee issues -- but a certain opposition leader keeps talking about how his party would win new elections. Who needs that right now?

From Germany, with love -- and back at her!

For those of you who might be getting tired of my stories about "Girls School" (GS) graduates, buckle up!

In few days I will depart for Greece to continue my mission to connect all 205 GS graduates from 1966-1978 -- from the year the American Farm School took over the GS from the founding Quakers, until they closed it forever in 1978. To refresh your memories, I was at the School 1968 -78, which is why I have such a close relationship with those students and their families. During that period I visited the village home of every Girls School student at least once. 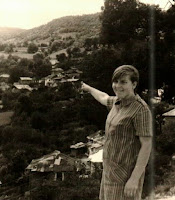 I visited Rosa Detsika (nee Kitti '69) in Koupa, Eidhomeni, a mountainous area very near the border w/"Macedonia" town now bearing so many refugee problems. To do so, you had to leave the asphalted main road. I was a master at navigating those one-lane cart/cow tracks, but on one occasion had a bit of a mishap. It had rained a lot, and the "road" was muddy and becoming rather treacherous. There wasn't really room to turn around either. Onward we went until my trusty VW slipped, leaving us suspended more than a little over the edge of a ravine. My colleague Carolina was close to hysterical, while I got out (carefully) and waved/shouted "Rosa" at the top of my lungs -- attracting the attention of the whole village across the way. Her father came post haste with his tractor to pull my car out of harm's way...and I was most grateful!

On another occasion -- this was a favorite village of mine! -- I went with my aunt Libby for a very pleasant visit. As we were leaving, Rosa's family presented us with a live hare (rabbit) squirming in a burlap sack. Fortunately for me (but perhaps not the rabbit), I convinced them that I was not going directly back to the School and simply could not take the rabbit. They kept it...

Last fall, I wrote to Rosa via her family in Axioupolis and received an answer some weeks later from Altena, Germany -- where I knew she had gone to work in 1970 like many Greeks. Unknown to me, she had stayed all this time. She has two children, a daughter (who now also lives in Germany, but not close by) and a son (who is a policeman in Athens.) There are now also 3 grandchildren in the mix. She was especially thrilled to get a contact list of her classmates, with whom she had lost touch!

Rosa is looking forward to retiring in 2 years and returning to Greece...but will she under the present hellish economic circumstances? Time will tell, but meanwhile I have her German phone numbers and will talking with her very soon...from Greece, with love!
Posted by Paula at 4:42 PM No comments:

Latest holiday missive from Serres, Greece, brought yet another coveted gift from my new-found Aunt Eleni Xanthopoulou. Seems as if trips to family villages outside of Greece -- formerly part of the Ottoman Empire -- are now more the norm than rare...and I hope I can get on one of those excursions out of Neos Skopos sooner rather than later.

Eleni and her husband did make such a trip to Skopos (in Turkey, and now called Uskup) awhile back. So I asked her if she had any pictures to share. And voila! This is a picture of the only remaining Xanthopoulos Family home in Skopos: 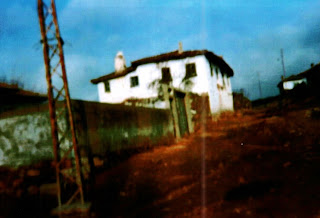 To be continued -- as in a few weeks I will be visiting Kolindros (Imathias) where Papou Xanthoulis Xanthopoulos had a restaurant/hotel type of establishment at the time he married Yiayia Pauline in nearby Naousa (1916). Opa!
Posted by Paula at 9:20 AM No comments: