OXI means NO, then and now!

Tomorrow is OXI Day in Greece. It's about saying NO against all odds...so I wonder what the Greek people are thinking.
Greece is commemorating the day in 1940 when the Greek Prime Minister Ioannis Metaxas refused an ultimatum from Benito Mussolini: Allow Italy to take over strategic locations without resistance or be attacked. Greece was ill-prepared to fight an all-out war at home against the German-Italian Fascist Axis, but could she give up her independence and aid/abet the war against the Allies?

Any practical leader might have considered taking the deal, but on October 28, 1940, Metaxas -- reflecting the will of the Greeks -- said OXI (NO): "The time has come for Greece to fight for her independence. Greeks, now we must prove ourselves worthy of our forefathers and the freedom they bestowed upon us. Greeks, now fight for your Fatherland, for your wives, for your children and the sacred traditions. Now, over all things, fight!"

The Greek Resistance radically changed the course of the war and history...and Winston Churchill later said: “Until now, we knew that Greeks were fighting like heroes; from now on we shall say that the heroes fight like Greeks.”
I was in Greece recently for another OXI Day in Greek history. Prime Minister Alexis Tsipras refused to accept a new bail-out proposal offered by Europe that was fraught with more of the same austerity measures that for 5 years had driven the Greek economy to the ground and created an unprecedented humanitarian crisis in a developed country. For months he had fought for the debt reduction/restructuring to make the Greek economy sustainable (later validated by the IMF), but wasn't offered even a crumb by the European "Creditors." Mr. Tsipras would not take the deal and asked the Greek people to vote on whether they wanted him to do so or not, pledging to abide by their wishes.
On July 5th, the Greek people -- with no promises of leniency and barraged by both misinformation and the shameless politicking of European leaders pushing for a YES vote (having ostensibly taken the deal off the table to boot!) -- again resoundingly said OXI! But Europe then turned its back on that cry of anguish and resistance, serving up an even worse deal just to show who's boss. Where's the love now?
This time it was a war of words like "Grexit" and threats of banishment from Europe if the worse deal wasn't taken in 48 hours...from a European Union with its alleged high ideals of collective cooperation, but an insanely unyielding allegiance to rules (not followed by Volkswagen). "The Creditors" -- many of whom made bad loans and then also made money off Greece's woes -- continue to cast blame and perpetuate punishment upon real people who don't deserve it...essentially the same people who said OXI to Mussolini and fought an insufferable, devastating war that killed 10% of its population to help save Europe as we know it.
Do 2 of 5 Greek children really deserve to live in poverty in the year 2015? OXI!


(Published in The Greek American Herald, November 2015)
Posted by Paula at 7:31 PM No comments:

Last March (on the what would have been my father Steve's 95th birthday), I stepped up my search to find out more about his own father: the heretofore mysterious Xanthoulis Xanthopoulos. When  (during the Ottoman Empire) did he leave Skopos in Thrace, with whom and where to first? Did he visit NY in 1913? Where were his relatives? Some of us cannot even agree on what his first name was, even though all his official papers (including the petition for naturalization that he signed) say Xanthoulis and not Xenophon. But I digress...

While in Greece last summer, I was able to connect -- at the last minute by telephone in a rather amazing way -- with Eleni Xanthopoulou, the adopted daughter of Xanthoulis' brother Kostas. Since then we have had an ongoing, revealing correspondence. And this with a woman I have yet to meet in person! Nevertheless, she has supplied me with documentation that proves beyond a shadow of a doubt that she is the real deal. 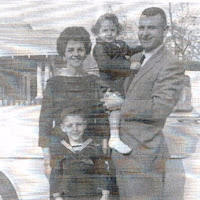 She not only referenced Stockton, California, in our initial phone conversation (and knocked me out of my chair!), but talked about photos that her family received -- and saved all these years! -- with boxes of clothes sent to Greece by my grandmother, Pauline Xanttopulos. Subsequently, I received photocopies of those images. This one of my Uncle Gus' family was taken more than 55 years ago...

Then a precious gift: a photo of Kokony Xanthopoulou -- wife of Efstathios Xanthopoulos (for whom my father was named), Xanthoulis' mother and my father's paternal grandmother. This was the first time my father's sister Mary or any of us had seen a picture of her. If my father was around he'd probably say,  "What's the big deal? I, of course, met my grandmother when she visited us in Naousa around 1925 before we came to this country."

But he's not around, and it is a big deal. And for that we have to thank Eleni Xanthopoulou. Stay tuned...
Posted by Paula at 9:59 PM No comments:

People have been asking how can they help Greece, and for good reason...Greece's 5-year long financial crisis is the source of hardship for thousands of families facing an uncertain future as their income (26% unemployment!), pensions, social, and health benefits have been slashed or completely eliminated -- and more cuts are coming. All hands on deck!

Two out of 5 children now live in poverty. Schools across the country have been reporting that alarming numbers of children arrive at school hungry. In rural parts of Greece, children have been forced to drop out of school to help support their families. In some cases, parents have even given up their children to local charities because they can't afford to care for them.  Here are two very important ways to provide immediate assistance:

1. You can sponsor a child in one of 4 SOS Children's Villages for orphaned or abandoned children located in Playiari, Alexandroupolis, Vari, and Crete.  Those sites provide a supportive and safe home in addition to healthy food, medical care, and other basic necessities -- plus care from trained educators, workers, and youth activity coordinators. SOS Children's Villages also runs 7 Social Centers throughout Greece dispensing a myriad of services and dedicated to keeping families together. With your help they will soon expand their services.

2. Greek Orthodox churches throughout the USA are actively supporting the IOCC (International Orthodox Christian Charities), which since 2012 has contributed more than $17.4 million to Greece in medical support, heating fuel, food, agriculture development, and job assistance programs...work done in conjunction with the humanitarian arm of the Church of Greek via  multiple programs and with the appreciation/support of the Greek government.  You can make your own contribution  by clicking HERE. Those gifts -- earmarked specifically for Greece -- are being doubled by the Jaharis Family Foundation up to $1 million!

Mulling over the take-aways from the "Stand by Greece" Summit held a few days ago at the Capitol Visitors Center in Washington DC -- and I have mixed emotions. 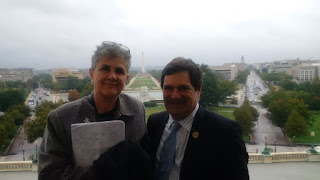 The bipartisan event was organized by the 136-member Hellenic Caucus co-chaired‎ by Gus Bilirakis (R-FL) and Carolyn Maloney (D-NY), and assisted by the Hellenic-American Leadership Council (HALC). Intense Congressional commitment to Greece was inspiring. I simply couldn't be prouder of Congressman Bilirakis! (And who knew that Chris Van Hollen [D-MD] was married in the Greek Orthodox Church?)

3 panels covered needed administrative/business reforms, reality on the ground (including a report by Metropolitan Gabriel on what Apostoli, the humanitarian arm of the Church of Greece has been doing bolstered by significant contributions from the IOCC/International Orthodox Christian Charities), and the geopolitical strategic issues/concerns.‎ The last underscored the damnable damage done to Greece for too many years primarily because of location, location, location... 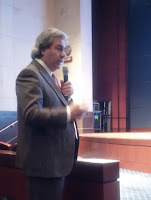 Contributions and initiatives were announced and applauded -- especially the generosity of HALC founder Nikos Mouyiaris of Mana Products, who will also walk the talk by building a factory in the Thebes area. A letter was initiated to the Secretary of the Department of Homeland Security, requesting technical assistance to be provided to Greece in connection with the current refugees crisis; we lobbied several reps in their offices. And a next project with SOS-Children's Villages (Greek website) for individual child sponsorship was also introduced -- following the $260,000 already raised for their Greek programs through HALC.
Standing by Greece, however, did not seem to include standing by newly re-elected Prime Minister Alexis Tsipras, who disappointed (or was it embarrassed?) some with his inability to impress in his interview with President Bill Clinton and the Clinton Global Initiative in New York.
PM Tsipras -- a relatively young man and not a capitalist by trade or inclination -- made a series of speeches around the UN meetings. It would have been nice if he had hit a couple of home runs, but that was no reason not to stand by him publicly. As the democratically re-elected PM of Greece by the Greek people in tumultuous times, he deserved more than a 10-day honeymoon (especially since others deemed business-minded had 5 years to make things better and did not). Instead some Greek-Americans ridiculed him and his government beyond what might be considered constructive criticism.
We all want to see the changes needed to rebuild the Greek economy and end the humanitarian crisis as soon as possible. But there will be no overnight miracles. Much will be rightfully decided by the Greek people, not by us -- and in a socio-political environment not like ours.  We really don't know all the facts or understand the mind-set completely. And Greece is not Astoria, Toronto or even Chicago.

Much must indeed change.   On the other hand,  some things about Greece and the Greek people will never change -- thank God!
Posted by Paula at 1:00 AM No comments: