Can't really remember my parents' last years without thinking of Tootie2, a remarkable feline who led a remarkable life.  She was our pal for 13 years.

Tootie2 was adopted for my mom in 1999 at Christmas Time. She had been diagnosed with non-Hodgkin's lymphoma and was rightfully deemed to be in need of pet therapy.  For three years, the cat was Angeline's pal, often sitting in her lap as she sat in her recliner. And on the night she died in 2002, Tootie2 was right on her bed till the very end.

(I'm told that Tootie2 had two previous homes, but was returned each time to Pets & Pals Animal Shelter -- clearly because she was destined for 2445 Gardena Avenue.)

Now my Mom had wanted in her waning weeks to get a second cat to keep Tootie2 company, worrying about what would happen when she passed. How would the cat and my Dad cope? They were sad, but coped just fine.

Tootie2 became Steve's pal, following him around like a dog and draping herself on his legs when he sat in his recliner. Did he ever figure out that she did not like to be over-petted, or did he think it was funny to bug her on purpose?  In any case, he would occasionally shriek, "She bit me!" And if I was in Stockton, he would add (for effect) "I'm going to send you to Miami with your aunt!" Fat chance.

But when Dad passed suddenly in 2007,  she really did come to Miami. It was my turn to be befriended by Tootie2, and she became my pal.   By then, her whiskers had turned distinctively white. In the AM, she would wait at the bedroom door facing out so that we could go into the kitchen together. Following a long-standing cat tradition at my place, she would enjoy a few licks of milk from a special little Greek dish.  She had her captain's chair (much to the consternation of another cat, ChrisDog, the original Milkman) -- but at night she would jump onto the bed, put her head on her little pink pillow toy, and watch TV. Did I mentioned that she spent the summer of 2008 on vacation in Canada, or that she always knew with ever-widening eyes when I was about to open a can of tuna even before I did? And, yes, she liked to lie on my legs when I sat on my recliner.

I have had three other totally amazing cats, but Tootie2 was the cat with a higher purpose. From California to Florida, she rose to every occasion. So when she passed away one year ago today following a long illness (and her last, never-missed licks of milk), it was truly the end of an era. It was also the first time in 30 years that I did not have a cat...and so far no replacement.

How can I ever replace Tootie2?
Posted by Paula at 10:35 AM No comments:

What's in an obituary?

Plenty. In a former life as a Development Director, I would scour the obituaries in the New York Times looking for clues to people who might support the school I was working for.  Obits expose family trees and thus are invaluable tools for genealogy research.

So nowadays I check the obits for anyone who is Greek, to see where they come from and whether by any stretch they are connected to someone I know or the towns that our forefathers came from -- and I always learn something regardless.

Sunday's Times (8-11-13), for example, told us about the sudden death of  Dr. George Moutoussis, 65, who was from Athens and specialized in Geriatric Medicine and Nephrology. His promise was: "To practice medicine in the old traditional way, when the doctor was not the provider and the patient was not the client." Amen to that.

But sometimes we are confronted with news that we could have done without -- like the obituary posted on August 7th in the Stockton Record for my friend Cally Anagnos, 84, a Giants fan and sister of the late, beloved Helen Gaines amongst others. The Anagnos family has had more than its share of illness and tragedy, including the recent death of Cally's daughter, Kathy. And just like that, the St. Basil's Greek Festival pastry booth -- once my mother Angeline's domain -- lost two devoted volunteers.  Zoi se mas. 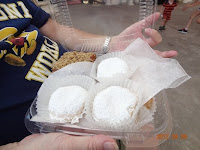 Now the rest of us will just have to carry on. See you in Stockton on September 6-8 for Greek Festival #54!

In a meeting in the Oval Office yesterday, President Obama gave the Greeks and Prime Minister Antonios Samaras some advice: “In dealing with the challenges that Greece faces, we cannot simply look to austerity,” Mr. Obama said in brief remarks to reporters after the two leaders met. “It’s important that we have a plan for fiscal consolidation to manage the debt, but it’s also important that growth and jobs are a focus.” (New York Times 8-9-13)...

Too little too late for a country with 26% unemployment (60%+ for young people under 25)? Hopefully more was said/done during the private meeting, as the people of Greece continue to suffer greatly for a situation not entirely of their making. Certainly, regular folks with no jobs, shrinking pensions, high fuel costs, and evaporating health care need support from us all.

Consider a trip to Greece soon and a visit to my Yiayia Sarris' home town, the beautiful and multi-faceted Koroni, Messinias.

P.S. Looking for a Koroni hotel?  Try the Hotel Diana --  modest, clean and VERY conveniently located "downtown" a few steps from the seaside restaurants, shops, etc. And a short walk to the beaches and kastro above the town.  Cost me 25 Euros a night last November, and I even had a key to the front door!
Posted by Paula at 2:44 PM No comments: