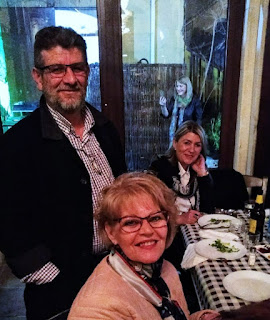 I recently returned to Cyprus with a traveling team of 10 Girls School graduates.  We covered a lot of ground in 5 days, but aimed primarily to reconnect with a group of  17 Cypriots who became students at the American Farm School in October of 1974, most as war refugees. Our visit was amazing -- we toured, we laughed, we danced, and were duly appalled at what we saw firsthand in the occupied town of Ammochostos (aka Famagusta). 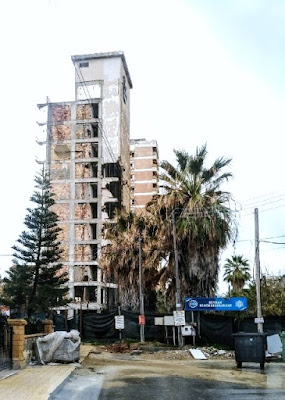 In case you have forgotten, Turkey invaded Cyprus on July 20, 1974, bombarding primarily the north including Lefkosia and subsequently occupied 36.5% of the third largest island in the Mediterranean. The occupied areas are recognized as an entity only by Turkey. The rest of the world recognizes only The Republic of Cyprus, member of the European Union and a country wrongly partitioned.

(Too many people have either forgotten what transpired in Cyprus or simply have no clue about the politics of the region. A recent email from a friend in California admitted: "I was not aware there were still occupation issues between Greece and Turkey." Cyprus is an independent country populated mostly by people of Greek/Orthodox origin; until 1960 she was ruled by the British and never joined with Greece. The Turkish invasion came in  response to a coup supported by the Greek Junta, while the USA stood idly by...Click on this LINK to my previous Cyprus report for more background information.)


Not only did 200,000 Cypriots become refugees in 1974, but occupied Cyprus was Turkefied in every possible way -- including the illegal transfer of Turkish citizens to occupy lands and homes that belonged to Greek Cypriots. We were privileged to be shown around the occupied areas of Cyprus by refugee friends, a couple that was living peacefully in Ammochostos when word came that Turkey was about to bombard the city. People fled south fearing for their lives, leaving everything behind. 30 years later, Sophocles and his wife Koula were allowed back just to have a look. They knocked on the door of the home they had built and went in to see the possessions they had left behind: glassware, furniture, rugs, etc. - all carefully preserved/used by the  not  particularly friendly Turkish woman living there. How would you feel about that? 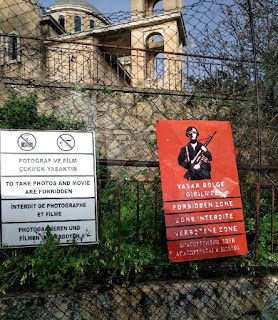 In Ammochostos  we suddenly came upon what is called "The Ghost Town" of Varosha -- a sealed-off area which before the Turkish invasion had been a modern, high-end tourist enclave and home to 39,000 Cypriots...and a favorite of Elizabeth Taylor's, no less.  Now it is surrounded by barbed wire fencing decorated  with ominous signs forbidding people to enter or even take photos. Hotels, homes, churches, schools, and  stores  are in a perpetual state of decay -- a monument to both the 1974 invasion and the ongoing unwillingness of Turkey to allow reunification of Cyprus. In 1984, UN Security Council Resolution 550 ordered Turkey to hand Varosha over to the UN for resettlement by the people who were forced out; Turkey did not comply.  Varosha has become nothing more than a bargaining chip for the firmly entrenched Turkish president and provocateur Recep Ertegan.


So what about the ghosts of said "Ghost Town?" They happen to be real people, watching and waiting for justice.  Have they been forgotten, too?
Posted by Paula at 3:21 PM No comments: