My dear aunt Liberty "Libby" Sarris "left" this morning (as the Greek people put it when someone passes away), details still coming in to me here in Thessaloniki. On the one hand I'm very sad, especially since I won't be in Stockton for her funeral. But on the other hand rather relieved that she is at rest. She even managed to go back to her apt yesterday for one day after 2 months of rehab!

Libby or Lib -- Greek name: Eleftheria -- was essentially the sister I never had, especially when I was young and needed someone to bum around with that was not my parents. It was not Ok to hang out too much with teenagers my own age, but it was very Ok to go somewhere with Thea...the boys were treated differently, what else is new? So we went to Greece together in 1962, before that was such a common occurrence -- quite the memorable adventure! AND I got all the hand-me-down sweaters! 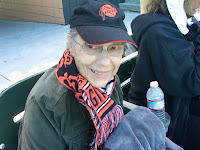 There may have also been some hijinks around important baseball, football or basketball games -- especially when rooting for the Stagg Delta Kings, Pacific Tigers, San Francisco Giants or 49ers. I gave up on the Giants years ago, but Thea was rewarded with multiple championships and visits to ATT Park. Her favorite player overall might have been Joe Montana, but Bill Walsh was God. Snoopy was the mascot to end all mascots.

And, yes, she took my brothers and me to the last Beatles USA concert in Candlestick Park circa 1969 -- not to mention to hear the Rolling Stones at the Cow Palace and some others at that rather smoky Fillmore Auditorium. (She also had many good times/trips with her pal, Stella Kouretas).

Let's not forget Liberty Sarris'  50+ years of dedicated service to the Stockton Unified School District -- beginning at Stockton High in 1947 and then primarily at the then newly-minted AA Stagg Senior High...back in the days when that school was way out there, nothing past the student parking lot to speak of. She was The Registrar and pretty much indispensable. (And I, personally, never got away with anything!)

Upon her retirement Libby received many accolades from her colleagues, the school district (for "Outstanding and Exemplary Service"), and the State Legislature -- and was called back repeatedly to help here and there. Something about institutional memory, no iPads required. She was also my main source of family info...and now it's the end of an era for the Sarris Family in Stockton.

In her last days, Thea often worried about her older and now deceased sister, Angeline..."I can't find your mother!" Or she insisted that Jell had just left or was in the next room. Or that Yiayia had been by. On the one hand, she knew full well that they were not actually there. Or, she may have known something we don't...Love you, Thea! 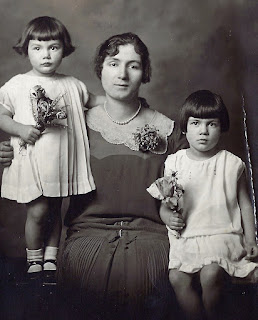 And first the Downs -- in case you were wondering about the refugee situation in view of the alleged deal with Turkey. We really don't trust those people, even as the Greek government tries to nail down agreements/services to lessen a double-edged humanitarian crisis. Were programs really put into effect today?  There are at least 46,207 refugees stranded in Greece (now being called "the warehouse of souls"),  and the Port of Piraeus threatens to becoming another Idomeni. Which refugees are actually qualified for asylum?
Meanwhile, there are ongoing reports of Turkish fighters entering Greek airspace. And, oh, did I mention the Greek condemnation of continued Turkish denials of the Armenian Genocide during the recent visit of the Armenian president to Athens? Or that Turkey has occupied a good part of Cyprus since 1974? (Let's discuss the Greek unfinancial situation another time...)
On the Up side, my search for Girls School grads (circa 1967-1978) is going quite well, leading up to a reunion planned for April 2nd. I think there will be at least 100 women there, if not more -- from as far as Germany, Athens, and Corfu.  Word is out and fingers crossed! 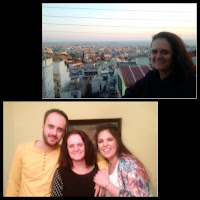 Today I took‎ a city bus up to the nosebleed section of Thessaloniki -- Kallithea, with an awesome view of the Thermaikou Bay/Mt. Olympus -- to visit Fotini Tourna (née Delianidhou '70) and her family. She has two very nice children, a policeman and (unemployed) nurse. Predictably, Fotini brought out photos of the good ol' days and we reminisced...and then discussed how we could located missing classmates. Daughter "Jenny"  (Evghenia) announced that earlier she had given Mom her first computer lesson. Woohoo!

‎It should be noted that I did call Rosa Detsika (née Kitti '69) in Germany as promised in my February 10th post, courtesy of Viber.* Rosa won't be able to be here on April 2nd, but she will be here in spirit along with about half of her 13 classmates...Ill  health is an ongoing theme in Greece, with deaths from cancer due mostly to environmental issues (like nearby wars and Chernobyl) over the top.


And so it never ceases to amaze me how the Greek people just keep on keeping on!

Sent from my BlackBerry 10 smartphone on the Verizon Wireless 4G LTE network.
Posted by Paula at 7:10 PM No comments: