Here I am in St. Stephen's Greek Orthodox Church at 7 Rue Georges Bizet in the XVI Arrondisement, about a 20-minute walk from my hotel. Today is a holiday in Paris, schools and many businesses are closed. Church and picnics are what happen on Ascension Day. (There appears to be no Greek enclave or neighborhood per se here in Paris, but I will have to explore that more during my next visit. There are a few Greek restaurants highly-rated on Trip Advisor, including the rather unique Aux P'Tit Grec on Rue Mouffetard w/Kyrie Antoni from Thessaloniki.)

Once inside I lit two candles for my parents -- and felt like I could be in Miami, Stockton. New York or anywhere Orthodox Greeks gather to pray and socialize (afterward)... except that the narthex and the nave are not separated by a wall, more Greek-as-in-Greece-styled. 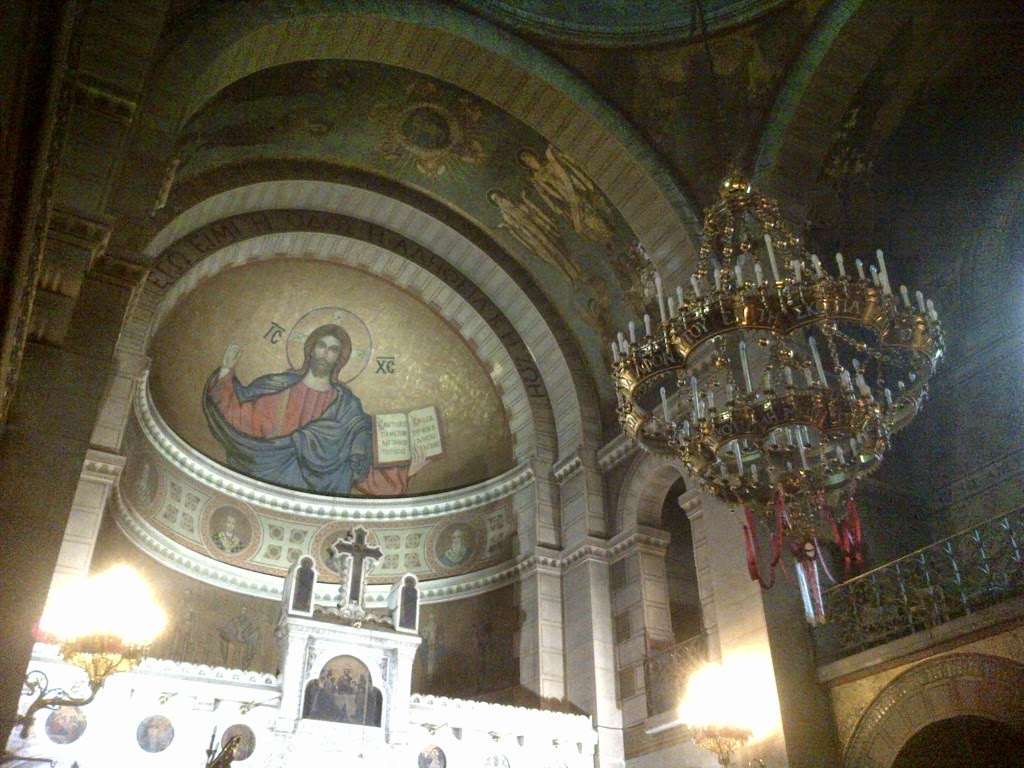 St. Stephen's -- the seat of the Metropolis -- was built in 1895 (pano-kato, I was told). And, yes, there is a woman in the ranks of 7 psaltithes! But there are only about two dozen people (young and old) here so far, sitting in about 8 rows of straight-backed wooden chairs with straw seats (with built-in wooden seats along the walls). Maybe there will be more when the Liturgy begins. Ah, it has now just begun and here comes a bespectacled young man with 3 small children...The Bible reading is in Greek and French.

The welcoming smells of incense complete an environment familiar to me since childhood. And so it shall always be.

Sent from my Verizon Wireless BlackBerry
Posted by Paula at 5:43 AM No comments:

It was rainy and nasty this morning on the way to Utah Beach in Normandy, about 4 hours from Paris. Our tour guide prefaced our visit by saying that Utah was the good beach, while Omaha was a near disaster. That was just the tip of the iceberg.

While I had heard stories from my Dad Steve about his time in the Pacific Theater during WWII, none of that prepared me for standing on the French beaches in person. The weather on D-Day was nasty, too -- but by time we got there is was sunny and nice. And the ongoing gratitude of the French people in the surrounding towns was palpable as they prepare for June 6th, the 70th Anniversary of an Allied invasion that liberated Paris about 10 weeks later. They are our friends forever, regardless of you hear about the French.

I can't think of anyone I knew from Stockton who died in Normandy, though legend has it that Pete Spanos fought in France and was rescued by French nuns. As far as I'm concerned, they were all here -- every man and woman who fought for liberation from The Third Reich in World War II. 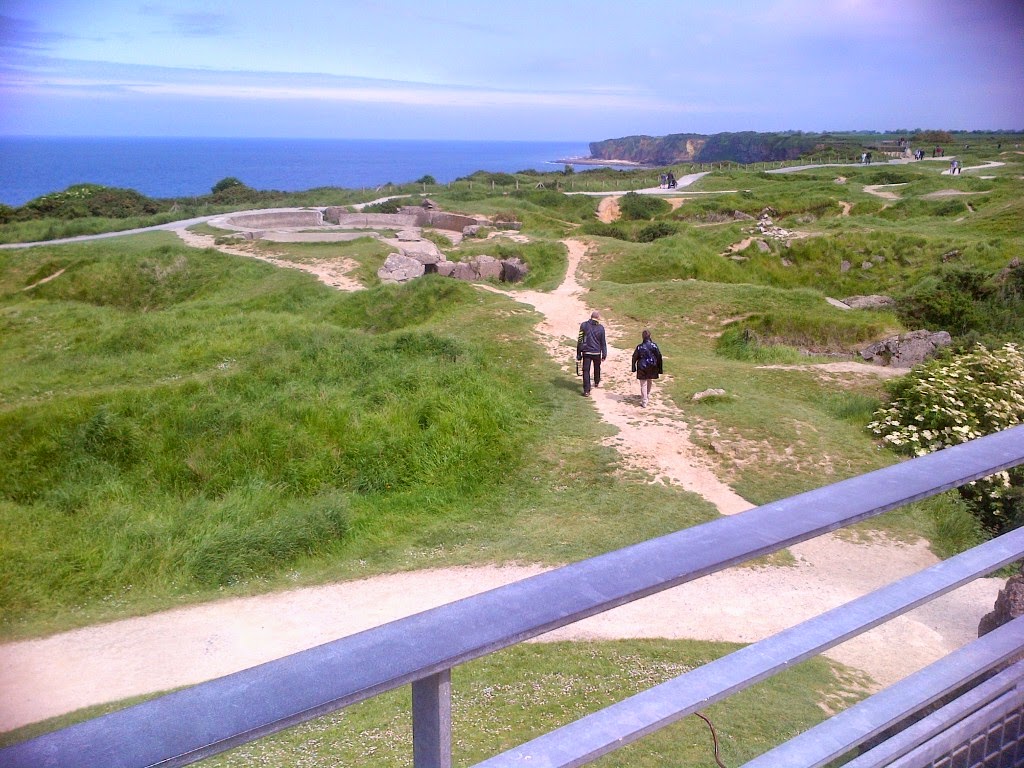 Our tour group moved from Utah Beach and the amazing museum there to Pointe du Huoc, where US Rangers had the thankless task of storming cliffs to take out 6 guns that actually had been redeployed by then.German pills boxes and bomb craters dot the landscape, and you can see for yourself the dramatic destruction of rocky cliffs by the repeated bombings -- all enduring reminders of the effects of war. 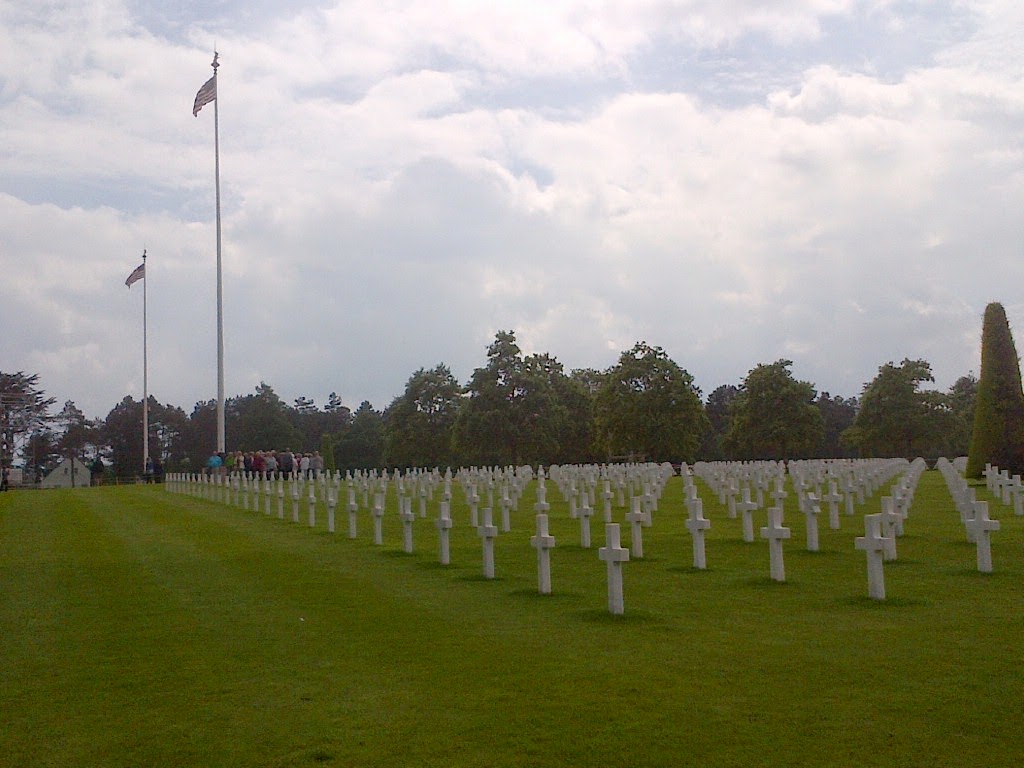 We ended our visit at the American Cemetery overlooking Omaha Beach, a killing field that magnified the sacrifice made by young, sometimes under-aged Americans who believed in their noble mission. Row upon row of Crosses and Stars of David commemorate 9,387 souls, including 45 sets of brothers. That mission is not to be confused w/the war in Vietnam or misguided adventures in Iraq and Afghanistan. This was the real deal.

All I can say is "God bless America!"

Sent from my Verizon Wireless BlackBerry
Posted by Paula at 7:34 PM No comments: