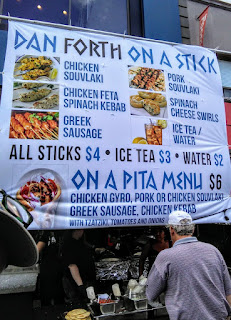 Finally had a chance last weekend to check out the "Taste of the Danforth" in Toronto's Greektown (reportedly the second largest Hellenic community outside of Greece). Regularly referred to as Canada's biggest street festival, the 3-day event is really just a big souvlaki fest -- meats of all kinds on a stick for $4. You can also find yummy spinach/cheese pies and "loukoumades" like my Yiayia used to make...or pay Battle Sports to smash some plates. Opa!

Walking along Danforth Avenue and watching Canadians of all stripes patiently line up for their souvlakia, I couldn't help wondering who there -- Greeks or non-Greeks, old or young -- had any concept of the grim (and timely!) history of Greeks in Toronto, who originally lived around Yonge Street.

101 years ago, Greek-Canadians were the victims of a race riot which lasted 4 days (August 2-5, 1918).  It was the worst riot in Toronto history, with thousands of Canadians furiously beating up on Greeks and destroying their property.

World War I veterans had been in town to voice their many concerns.  Canadians were misinformed about Greece's role in the war, thinking that Greece -- which remained neutral until 1916 -- was not on the side of the Allies. Moreover, Greeks in 1918 were simply not thought of as being "white." * So when an alcohol-impaired vet was removed from a Greek restaurant, the incident was blown way out of proportion...Greeks, who were already perceived as not doing enough to help Canada, had allegedly mistreated a vet! 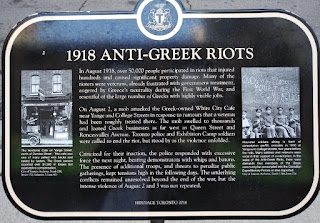 On August 2nd, 600 Canadian vets stormed the White City Café on Yonge Street, destroying everything inside and looting the kitchen...and that was just the beginning. An estimated 50,000 people joined the fray on both sides, and police went from doing nothing to indiscriminately attacking rioters and innocent bystanders. The city was on lock-down. Some 500 people were injured and Greek businesses suffered $1,000,000 in damages by today's values -- all due to an almost (but not quite!) unimaginable act of hate an violence.**


To make a long story short: Greek-Canadians ultimately rebuilt and became a vibrant, productive and beloved part of modern-day Toronto -- a town that now prides itself in being multi-cultural.

But first they relocated to Danforth Avenue.

*In the USA,  Greek-Americans -- just like other immigrant minorities -- were targets of the Ku Klux Klan, leading to the establishment in 1922 of the American Hellenic Educational Progressive Association (AHEPA).

**For the whole story: "A century later,  a vicious anti-Greek riot in Toronto offers lessons for today" by Toula Drimonis (Maclean's Magazine, 8/1/18)

Sent from my BlackBerry - the most secure mobile device
Posted by Paula at 1:17 AM No comments: