Greeks living in Europe are connected to 2017 Greece, Greek-Americans not so much...

Back in the States after my 11-week stay in Greece (primarily in Naousa and environs),  it seems surreal that I was spending the weekend in the village of Nea Pella not too long ago.  I am constantly asked: "What's it's like there, how are things going in Greece with the economic situation." Things will most probably get worse for regular folks before they get better...and, it's a totally different world.


About a half a million Greeks have left Greece since 2010 -- many of them educated young people, a "brain drain" that will have lasting repercussions. That does not count those who left years earlier to work in nearby more prosperous countries. A number of AFS Girls School graduates did so, and some subsequently put down roots in Germany. Germans occupied Greece not all that long ago without paying a drachma in Reparations...and are not as a country exactly at the top of the Friends List due to austerity measures being repeatedly inflicted on the Greeks primarily at German insistence.


So it was with a bit of a chip on my shoulder that I set out shortly after Easter for a 4-day visit with a grad living in Essen. Soula '76 had traveled to Thessaloniki not once but twice recently to take part in our Girls School reunions. I wanted to know about her life there, how do Greeks live in a second European country so different on many levels?  I was surprised to like Essen -- and gained insight into why many Greek-Americans do not have the same connection to or concern for 2017 Greece as do Greeks currently living in European countries. 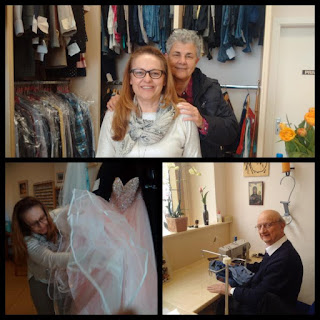 Essen -- home of the infamous Krupp steel empire and Zollverein coal mines that closed in the 1986 -- is a beautiful city of 589,000 that has spent years being built beautifully upward to erase its wartime, sooty past. It's now a green, clean city filled with charming homes (for the most part) and perfectly manicured gardens. Colorful tulips, excellent ice cream and bike riders everywhere!


As previously reported ("When Greeks went to Germany...and some stayed"),  Soula not only earns a good living in Essen, but appreciates her current home country even as she is constantly connected to Greece.  She has a small business with 2 additional employees in an upscale neighborhood, a meticulous shop that specializes in clothing alterations...and where the racks are consistently bulging with garments: "People need to come and get their clothes, we are out of room!" At least 3 times during my visit, we ran into customers of hers on the street who greeted her warmly and vice versa. From an economic standpoint, it would be ludicrous for Soula to return to Greece permanently.


She has long-lived in the same apartment building as her sister and brother-law, just 2 tram stops from work, and has a number of Greek friends that she pals around and travels with. And most importantly, her 2 sons and their families live in Essen, too, where they grew up after Soula migrated in 1990.  They have their church, "Greek School" and Greek soccer team for the grandson, plus Greek TV -- not unlike Greek-Americans. I flew RT from Thessaloniki to Dusseldorf for 109 Euros, so travel back-and-forth by plane and also by car is not a hardship. And if people are not actually going to Greece, they are in constant contact with their relatives and friends on the Internet (via Facebook, Skype, Viber and WhatsApp).  Greeks in Germany and other European countries are closely connected and dedicated to their homeland. And they feel the pain.


Most Greek-Americans (like me just a few years ago) not so much -- even with the Internet, our many organizations, newspapers/TV, or through church with some charitable projects for Greek Relief (as if Greece is a "foreign country"). Almost all Greek Orthodox congregations in the States have annual, highly-successful Greek festivals where their heritage is extolled and exploited. But just ask the parishioners what they think about how their relatives are doing back in the village and are they extending a helping hand to anyone, and you might be met with blank looks or worse yet ignorant/disparaging comments about Greeks in Greece being lazy, corrupt and not paying their taxes. Talk about fake news! Half of all Greeks are now living below the poverty line due to 25% unemployment/constantly reduced pensions....and many don't even have $$ to pay their electric bills.


Clearly, distance and time have disconnected Greek-Americans to a great extent from the current Greek reality. So many more Greek-Americans must make renewed efforts to care for real about the humanitarian crisis in Greece, to be in touch with their relatives in the Old Country. Extend a helping hand if you can. At the very least, feel their pain -- which is collectively our pain, whether you like it or not.


PS: Political activism helps, too! Rep. Gus Bilarakis (R-FL12) is a very dedicated co-Chair of the 130-member Congressional Hellenic Caucus along with co-Chair Carolyn Maloney (D-NY12). Did you know that Sen. Chris Van Hollen (D-MD) was married in the Greek Orthodox Church and is also very active on behalf of Greece? Join the Hellenic-American Leadership Council (HALC) to receive daily news about Greece and Cyprus. Or start your own project to help Greeks in Greece. Zito Hellas!
Posted by Paula at 10:58 AM No comments: