Greek elections not for the faint of heart!


Sunday, May 26th was election day throughout Greece. Greek citizens 17 and older voted for municipal mayors/councils (DIMOTIKES), local councils (KOINOTIKES), regional governors/councils and European Parliament representatives -- marking 4 separate paper ballots by hand in 2 adjoining rooms (mostly in schools), each with 2 secrecy booths and 2 acrylic ballot boxes. And at the end of the day, the votes were counted by hand. 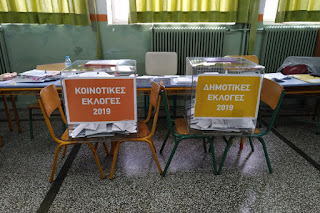 By joining the campaign of the only woman running for mayor of the Naousa Municipality ("DIMO"), I got to be a poll watcher with a birds eye view. And while the above might sound practically impossible to execute, I am proud to report that voting went amazingly well -- certainly no "hanging chads"or malfunctioning voting machines. Each polling place was run by a designated lawyer; ours was extremely capable and cordial. Everything was clearly done "by the book."


For Naousa mayor, the 5 candidates had each formed a "parataxi" or grouping. Each group had a name like "Koinos Topos" or "Ena Mazi." Pre-voting activities included 2 debates, public speeches, articles in local newspapers, videos on Facebook, and campaigning that extended to the 19 surrounding villages -- not to mention political pressure applied every which way and lots of decisions being made strictly according to personal relationships.


Each mayoral grouping was on a totally separate ballot -- paid for by the campaigns! -- with a list of Council candidates that was at least 40% women. On Election Day, each voter was handed  a white envelope and all 5 ballots (+ a blank sheet or "lefko" for abstentions) and could choose one, automatically giving that mayoral candidate one vote. The voter then made a cross next to up to 4 names on that ballot, sealed it in the envelope and dropped it into the ballot box. Polls closed at 7 pm, and by 10 pm we had the top mayoral results from 71 polling places.


Official Turnout: 64.32% of 33,102 voters registered throughout the Naousa DIMO with 1.27% "lefka" and 3.53% nullified because of the way they were marked. (Voting up to the age of 70 is compulsory, but many elderly voters did turn out. Also exempt were voters who were 200 kilometers from their place of registration. Conversely, many voters traveled even great distances to go back to their places of registration. Citizens are automatically registered and listed by the government when they turn 17. And there appears to be no current penalty for not voting.)


In Greece (as in most European countries and many others) there is no "winner take all"; it's the percentage of votes that counts. No Naousa mayoral candidate got a majority, and only 37 votes separated the two top vote-getters. But the top vote-getter got 12 seats on the City Council by virtue of the percentages, and the top vote-getters on his list won those spots. The breakdown by candidate was 12, 11, 4, 3, and 3 = 33 total seats. And each candidate not becoming mayor automatically gets one of the Council seats his or her group won.


On Sunday, June 2nd, there will be a run-off for Naousa mayor between the incumbent Nikos Koutsoyiannis and upstart Nikoloas Karanikolas. Unfortunately, Ilia Iosifidou did not make the cut, even though some say she was the most qualified.


Meanwhile, Prime Minister Alexis Tsipras acknowledged that his SYRIZA party was thoroughly beaten in the European Parliamentary elections by calling for "snap" Greek Parliamentary elections. They will be held on July 7th instead of October as previously scheduled, and during a summer month for the first time. At the moment it looks like SYRIZA will go down to the New Democracy Party largely credited with steering Greece into the financial abyss in the first place circa 2008...


Greek elections are indeed not for the faint of heart!
Posted by Paula at 5:50 PM No comments: