On the subject of Mikis Theodorakis, in Naousa.

In case you don't know, I decided to rent an apartment in Naousa (Imathias), the "Heroic City" -- the town where my grandparents Paraskevouda Koutsouki and Xanthoulis Xanthopoulos were married 100 years ago in Panayia Church and where my father was born in 1920. So here I am.
Having come down with a case of the flu, I managed to go look for a chicken to make soup -- and was directed to a store where the woman deals only in chickens and eggs. When I asked if she sold the chickens in pieces or whole, she said any way I wanted. And in a matter of seconds I got a whole, completely skinned chicken (for 6 euros) -- saving me a lot work and mess in my tiny kitchen. I love that woman!
Naousa is a cultured town of 23,000 people. There is a LOT going on here. Accordingly, I saw posters for a concert of "The Love Songs of Mikis Theodorakis" at the Town Theater featuring a band of mostly mandolins‎ and a chorale from Corfu. It was put on by "Hope," a local group raising money to feed indigent families. I was surprised  that the ticket was only 5 euros, and the not small theater was packed with several hundred people. The concert was amazing on many levels. 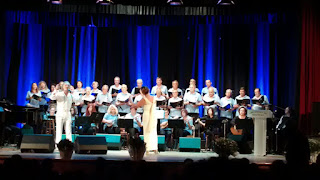 The 21 songs were prefaced by a narrative of when the songs were born and why, and also who wrote the words -- mostly famous Greek poets (Elytis, Cavafy) and others (Naruda). It was amazing not to just hear the songs, but to try and grasp the scope of Mikis Theodorakis' music and his life's milestones fighting for justice and freedom as a fearless and unapologetic leftist. He is most certainly one of the most important Greek patriot-artists of modern times, whatever your politics are.
More amazing was the response of the audience, ‎mostly senior citizens in a town that suffered greatly during WWII and the brutal Civil War that followed (that no one talks about). Everyone loved the music and did what I love so much about the Greeks: they sang along, like they do in restaurants or wherever there is music. It's a certain joie de vivre rarely released in the US and continues to override even the horrendous economic situation we face here.  People always know all the words to all the songs. Beautiful, to say the least.
Thank you, Mikis Theodorakis!