It was a deja vu kinda weekend in Greece -- strikes against more punitive legislation voted on late Sunday and angst about the meeting of European financial ministers (aka "The Creditors") that followed. I had been running around preparing to leave Greece after 3 months right in the thick of things. Eight o'clock flight to Munich, and I was going to sleep all the way.  But next to me sweet Kyria Despina of Mikrohori, Dramas, had other ideas. She wanted to tell me her story.

She wanted me to know that she was on her way to her son-in-law's funereal. He is German, she said, but was such a great guy. He met her daughter when he ate at her taverna in Munich. There were always lines of people waiting to get in, until the place closed on its 30th anniversary. The sign outside had extolled "Mom's cooking."


Despina was not only "Mom," but had actually worked about 20 hours a day back then. Early AM at the Herta slaughter house in Dachau -- just across from the infamous Dachau concentration camp -- where 1250 pigs and 50 cows were processed every day. ‎ Then an afternoon stint at her husband's coffee house. Followed by a shift at the taverna, from which returned about 1:30 AM only to start up again around 4:30. Kyria Despina is retired now, but she looked quite sad and worn out.

Too many people I saw every day in Thessaloniki looked sad and worn out ...resigned to whatever was needed to make Greece whole again, and trying hard to make do. But it is never enough -- now more pension cuts, higher taxes on many things like cigarettes and coffee (from 23 to 26 %), etc. Hey, Greeks need to stop smoking, but they will never stop drinking coffee.
Kyria Despina's story of hard work in Germany is a very common one. Many Greeks went there to work not long after the war in a country prospering because their wartime debts had been forgiven. Germany needed those workers, until they didn't. Now Germany & Co. is the boss of Greece, and Greeks have been labeled by some as lazy. You cannot make this stuff up!

Yesterday, a Girls School grad and restaurant owner in my Dad's hometown Naousa told me: "Greece is a boiling pot." The press doesn't mention the thousands of suicides, she rasped -- and I was taken aback by her informed passion and weary anger. She was about to fill out papers registering the fact that the ridiculous spring weather -- which had included hailstorms -- had damaged about 80 % of their fruit trees. What's next?


Meanwhile, in Munich there is a funeral on Friday, and Kyria Despina will be there.

NOTE: There is a shred of hope for the Greek economy. For the first-time, the Germans have signaled some willingness to discuss debt reduction -- the only way that Greece can actually recover instead of continuously cutting pensions to borrow money to pay back the banks. That's what Tsipras was fighting for last summer...You didn't think these bailouts were actually helping the Greek people, did you?

Sent from my BlackBerry 10 smartphone on the Verizon Wireless 4G LTE network.
Posted by Paula at 2:00 AM No comments:

Left Kyparissi (KYP) yesterday, but only in body not spirit. In fact, I began a process of finding a place to stay there next spring for 2 months. Yup, KYP earned a try-out for permanent status...


I had hoped that relatives who no longer lived there full-time would join the traditional ‎convergence on their horio for Easter. KYP was indeed quite crowded over the holiday weekend, but not with the important people on my list.  One of two surviving children of my Papou's brother Ilias (the infamous Louis Sarris) called me from Athens to lament that we would not meet. I promised to visit on my next trip. He seemed sad about that...

And I got to thinking‎...for 6 days I heard over and over again, "He could have answered your questions" or "My Yiayia knew all about that." In fact, one font of information, George Poulakis,  passed about 10 days before I got there. Another, George "Mountzouras" Kolomvotos (also of San Mateo) died suddely about 2 months ago. I wasn't going to miss a chance to meet Ioannis Sarris and his sister Angeliki sooner rather than later!


So I changed my plans and stopped over in Athens on my way back to Thessaloniki. I had asked him what could I bring from his horio. "Haroupia!" he said laughingly. This morning I went to his apt in N. Irakleon -- an Athens northern suburb not so easy or cheap to get to‎ today because all public transportation workers were on ‎ strike. Again. 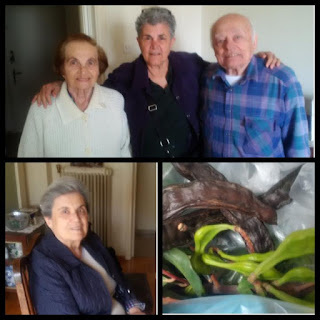 Uncle Ioannis Sarris, my mother's first cousin, got his haroupia (carob pods) whether he was joking or not, and he laughed some more... and seemed quite pleased to meet me -- right along with his son Ilias‎, sister Angeliki and her daughter Voula (Paraskevi!), and Eleni Ianniou who is the widow of their brother Anastasios. Thea Angeliki kept asking, "What is the purpose of this Family Tree investigation?"  Her nephew's answer? "So we can find out who we are!"

I had met Eleni last summer in KYP. Her sister is a historian who continues to write about her village.‎ Eleni came armed with more paperwork than me, and we (sort of) took turns sharing info and asking questions. We finally identified "Thea Andonina," who sold a Sarris aloni (threshing place) and home to the father of an old geezer I had been hanging out in the kafeneion with. I now know where in KYP the Sarris family lived before Ilias built the large home above the Sarris Mill. Her husband Andonis died in the States in 1919. We're not sure if he was the brother of Papou George Sarris' father Nicholas, or...

But there was bigger news: Nicholas Sarris -- who first bought the mill in 1907 -- also came to the States and then returned, potentially‎ even before my Papou came over in 1911. Got to shuffle those old photos back in Miami again to see if we can identify the man who then died in KYP on March 9, 1922. To be continued...

Sent from my BlackBerry 10 smartphone on the Verizon Wireless 4G LTE network.
Posted by Paula at 3:19 PM No comments: 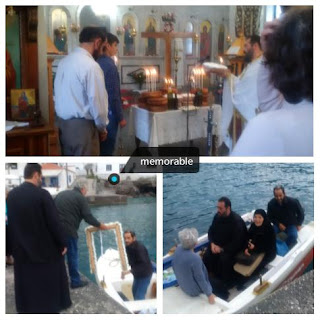 Yes, St. George's Day is normally celebrated on April 23.  But because Easter came after that‎, it was celebrated today (The Second Day of Easter). And tomorrow is officially May Day. Sweet!
And normally here in Kyparissi, the local priest is taken by boat to tiny St. George's church, about a 30 minute walk from the village. I was determined to hitch a boat ride to celebrate my Papou/Kyparissioti George Sarris' nameday -- family facts I foist on anyone here who will listen -- and then walk back. All went well at first, as the priest and‎ psalty (Mattina, a local nun) were loaded onto the boat along with all their accoutrements for the first run. ‎I was pretty excited.
Just as the party of four -- did I mention the boatman George's mom? -- made shore, down came the rain. They quickly borrowed the little church's antique St. George icon ‎and turned back. Services were then held in Aghia Triada, one of Kyparissi's 3 churches. About 20 minutes later, the sun came out. Better luck next year!
NOTE: Finally made contact with Mihalis Papapavlou, nephew of George and Pete Pappas (and cousin of Andy Pappas). He lives in a house across from my hotel, where I stayed in 1974 on a visit with my Uncle Pete and Thea Faith -- when Kyparissi still had no electricity and no road. In those days you came by boat...and we left by a caiqui driven by Barba Ioannis Zafeiris, father of today's boatman. Mihalis lamented having lost track of a paper his father left behind outlining their family tree. He thinks there is a connection betwen the Papapavlou and Sarris families. I need to ask his brother Nick, who got away back to Athens before I could nab him. Shortly, Georgia Adams (from Stockton, Calif) will be arriving here, and we can sit around pondering our relative family trees together -- and maybe even connect the Sarris and Vasiliou families. Who knows?
Sent from my BlackBerry 10 smartphone on the Verizon Wireless 4G LTE network.