Today I am thinking about my dad Steve Xanttopoulos, who passed away exactly 8 years ago.  He was a devoted family man and Greek Community leader -- very handsome in his youth and quite a character in his later years. Some people might remember that he measured his life by how many St. Basil's Greek Orthodox Food Festivals he was involved in (47) and how many priests he had worked with (17). Unfortunately, current Father Pete Sotiras didn't make the cut...

The Xanttopoulos family story is referenced in other blogposts -- beginning with how Efstathios (Steve) came to the USA in 1929 with his mother Paraskevoula (Pauline) and sister Theopisti (Faith) to be reunited with their own father Xanthoulis, who had gone ahead to San Francisco in 1920. They came from Naousa, which had been liberated from the Ottoman Empire just 4 years before my grandparents married in 1916. (We celebrate March 25th based on the 1821-1832 liberation of the bottom half of Greece, but things were very different in Macedonia.)

Steve Xanttopoulos was very proud of his Greek heritage and his hometown of "Niaousa," as he pronounced it.  His memories of The Old Country were predicated on heartfelt patriotism scarred by the grave economic hardships of the times. It is the quintessential Greek immigrant story of the early 20th Century -- hardship, displacement, sacrifice and hard work... though as the years pass and new generations are born, the details start to either fade or take on a life of their own. That is why genealogy and family trees are so important!

My dad's brother Kostantinos (Gus) and sister Mary were born in San Francisco and Stockton, respectively. Much of the story then becomes a bit murky -- though records show that Xanthoulis Xanthopoulos had a candy/hat cleaning store at 1590 Ellis in San Francisco and died of cancer there on April 26, 1941, at Laguna Honda Hospital. He was buried at Greek Orthodox Memorial Park (Colma). The rest of the family was still living in Stockton...

Even less is known to us about Papou X. pre-Naousa.  The too few official documents that we have were squirreled away my dad for many years. Other clues are scarce...but lead Skopos, a town in Eastern Thrace that was then part of the Ottoman Empire and is now part of modern Turkey.

My father might be surprised to know that today I am also thinking about his father...because of all my grandparents (ALL Greek), he is the one who still begs the question: "Who was that man?"


I am determined to find out, and I think Steve would be OK with that. 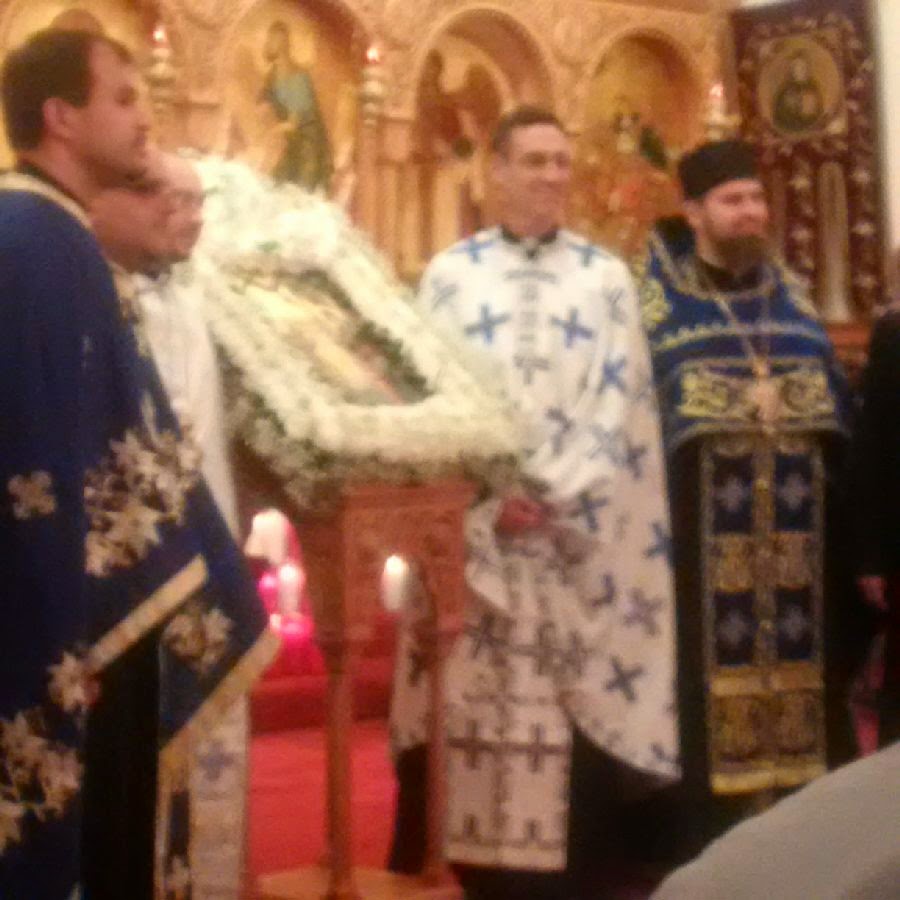 Came up NE 2nd Avenue last night, to the Greek Orthodox Church of Annunciation in North Miami‎, the one that reminds me so much of the Old Country. It's about a 30 to 40-minute bus ride, plus a 10-minute walk -- and it was a night-time foray, but on a very special night. Orthros was being celebrated on the eve of the church's feast day. And, of course, the night before Greek Independence day.
I was promised lots of priests and I got seven, including Father Spiro from Miami's St. Sophia mother church.  It was a beautiful service -- complete with chanting in several languages (including Romanian and Russian, Father Roman Galben was born in the Ukraine), a grand Panayia icon procession, the blessing of many loaves, a compelling sermon on the role of the Theotoko, and a nice group photo-op. (Should I mention the priest talking on his cellphone in the alter before the service started?)  ‎

But here is the best part: an 80-year-old alter boy! I was flabbergasted and amazed to see my usual table-mate at Sunday coffee hours -- a sweet, quiet elderly gentleman -- emerge from the alter in his street clothes to process with the candlestick. No robes, just a stoic look of duty served. Guess the usual kids -- except the ever-present and dutiful Kosta -- were doing their homework. So this loyal church member had jumped right in.
Mr. Dimitri later told me that he is ‎from Kolinas near Trikala, coming to Chicago in 1952 at age 18 and to Miami in 1957 -- well before the first liturgy was celebrated at the North Miami spin-off church in 1965.  He said, furthermore (and without prompting), that he is 80 and 1/2 years-old. And clearly very proud of that and of his heritage.

And that, my friends, is the meaning of Zito Hellas.