What do you really know about Cyprus?

Especially now as the plot surrounding the disappearance of Jamal Khashoggi thickens with Turkey and its President Recep Ertogan right in the thick of things. Turkey is always front and center here in Greece.  And certainly no less in the Republic of Cyprus -- an island surrounded by Turkey, Syria, Lebanon, Israel and Egypt. Cyprus won independence from the British Empire in 1960...only to be partitioned in 1974 when Turkey invaded in response to a coup cultivated by the Greek Junta to overthrow Archbishop/President Markarios and join Cyprus with Greece. The coup failed, 3,000+ Cypriots lost their lives (many more, including children, still unaccounted for), and 200,000 Greek Cypriots became refuges overnight. ﻿﻿
﻿

On the plus side, Greece suddenly became a democracy again following the collapse of the Junta and return of Konstantinos Karamanlis -- but not before a rather scary (I lived through it!) General Mobilization of many thousands of military reservists in anticipation of war. Turkey would eventually claim 36.5% of the island and create the Turkish Republic of Northern Cyprus, recognized today only by Turkey. The two parts are separated by a UN buffer zone, the Green Line, and a Turkish flag flashes brightly over Lefkosia every night from the "katehomena"  (occupied  territory) to add insult to injury. Many thousands of Turkish nationals have been repatriated to occupied Cyprus in defiance of the Geneva Convention. And 44 years later, Greek and Turkish Cypriots are in perpetual reunification  talks constantly complicated by the hostile demands/actions of Recep Ertogan.
﻿﻿

By now you might have forgotten about that Green Line and focused more on oil/gas drilling confrontations or a financial crisis (now mostly resolved) caused in part by a sudden influx of big Russian money. But did you know that 3 percent of Cypriot territory is still under foreign military control? And did you notice that during her recent confirmation hearings, the new US Ambassador to Cyprus had trouble acknowledging the events of 1974 as an invasion by Turkish troops? Ouch!

It's no wonder that there is not a whole lot of love lost between Cyprus and the UK because of the military bases, Greece for their role in the ill-fated coup, and the USA for supporting the coup and doing nothing to thwart the Turkish invasion. Thank you Richard Nixon and Henry Kissinger. ﻿﻿﻿﻿ 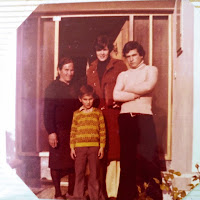 Last month I revisited that Green Line in Lefkosia (aka Nicosia), which bears little resemblance to what I saw in 1976 when barricades were manned by Greek and Turkish soldiers screaming obscenities at each other while UN Peacekeepers patrolled a tiny strip in between them. I had gone then to visit with the families of 17 boys we took as students at the American Farm School after the Agricultural High School of Morfou had been closed by the invaders. The students adjusted incredibly well at the School. But in Cyprus things were super bleak as many lived in refugee camps or over-crowded homes. From certain vantage points we could see untended crops that had simply dried up. At that point in time there was precious little to look forward to.

Today one can cross back-and-forth through checkpoints along the Green Line. In Lefkosia, show your ID at passport control and go right ahead. The Turkish side is sadly dated; I saw a man in a small, dingy shop actually stuffing a comforter with cotton by hand.  No Burger King or Starbucks there. You can buy cigarettes and pharmaceuticals sans EU taxes and then have a leisurely lunch -- just don't be thinking you can get your property back. 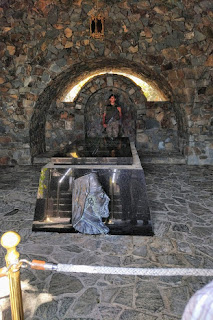 My Farm School graduate hosts Spyros and Nikos introduced me to their wonderful/most hospitable families and drove me all around free Cyprus. We visited a raft of towns, villages and other sites, including the front gate of the British airbase along the beautiful southern coastline of Akrotiri.  Then, of course, a pilgrimage to the final resting place of Archbishop Makarios  at Kykkos Monastery in the Troidos mountains -- about 11 km from mountaintops planted with British radar stations. You can read about it, but not fully feel it until you are suddenly told "You cannot be here" by a British soldier on an idyllic Saturday afternoon.

Most memorably, I was able to visit with half of those students who came to the American Farm School in 1974 at a special "mini reunion" dinner. There were stories, laughter, selfies, great food (love that sheftalia and halloumi!)...plus special music. While several grads do work in agriculture, Andreas is a music teacher and Tony Solomou a well-known singer/composer/activist. Tony was especially touched when I showed him a photo of me and his family circa 1976 (see above), as his mom had died about a year ago. His singular compositions about occupied villages like his own Aghia Marina are both wistful and defiant. Have a listen.

Then think about what you really know about Cyprus.