Spent about 6 hours last weekend at the St. Sophia Greek Orthodox Church festival here in Miami; it was the 35th Edition...I have always considered the St. Basil's Greek Festival as the gold standard of Greek church festivals, but St. Sophia is moving rapidly up the list.

I discovered that for the third year, free and very popular cooking lessons were being offered.  They have been organized by the tireless Renee de Ramirez (with Salonika roots!), who also developed a very informative book on CD for $5 benefiting the church. There were a total of 12 lessons over 3 days -- including recipe handouts, samples and wine tastings. Something different and tasty was the Fennel/Eggplant Salad. Excellent program, I couldn't stay away.

The ouzo slushes available at the bar have, of course, a special place in my heart.  But I was especially taken with The Loukoumatha Machine. Yes, a mechanized way to mix the dough and drop the right amount into bubbling cooking oil.  And voila! Dozens of loukoumathes to fish out and drain in a colander layered with paper towels, then the syrup and cinnamon.  Brought back many memories... 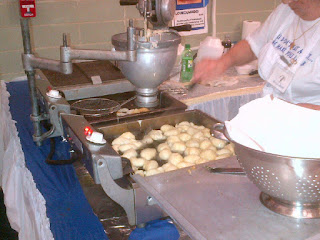 The volunteer cook above did not know the origin of the machine. Was it invented for loukoumathes or donuts or what? In any case, it definitely made the cooking easier and faster for bigger quantities -- not to mention quite a show. No more mixing bowls of sticky dough or frying on hot plates while the customers wait.  What would Yiayia Sarris think about all that?

As I ate my little bowl of loukoumathes, I remembered New Year's Eve at my grandparents house circa 1958-60.  We kids spent it there along with Bishop Demetrios, who would come to Stockton the day before St. Basil's Day and to the house for a snack and loukoumathes. Then we would watch "Gunsmoke" and the Bishop would fall asleep in the rocking/easy chair.  We'd snicker quietly, my Yiayia would wake him up, and my Aunt Libby would drive him (always nattily attired in his black cassock, fedora and bishop's staff) to the Hotel Stockton. Those were the days...

My cousin Michael Peter Pappas passed away last Friday in San Francisco.  Born in 1942, he had his 70th birthday last December.

It's very sad because he was ill for some time and suffered quite a lot. His devoted wife of 20 years, Virginia, has been very ill herself -- undergoing chemo even while Mike was in hospice care for some weeks at their home. At least she will now have some peace in her life to take better care of herself.

It's also sad because that generation of the Peter Pappas Family is gone.  Mike's only sibling Tony died in 2004 after a serious illness, and he was only 56.  Their parents Pete and Faith (Xanttopoulos) are also gone.  Mike was the oldest of us cousins. And we do have our memories... 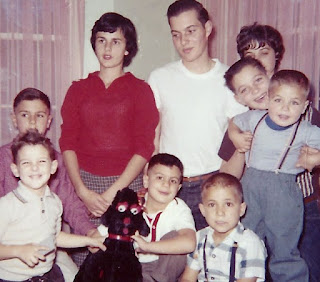 Mike had 3 sons with 2 previous wives: Stephen & David (twins) and Andrew. They all live in Oregon. Hopefully we can keep in touch going forward.

Meanwhile, Mike's funeral service will take place tomorrow at 11 am at the Holy Trinity Church at 999 Brotherhood Way in San Francisco.  Then he will be buried in the Greek Orthodox Cemetery in Colma -- where he will join his grandfather Xanthoulis Xanthopoulos, a man none of us cousins ever met.

--
Paula Xanthopoulou
Posted by Paula at 8:34 PM No comments:

The Jews of Greece

Here I am enjoying lunch with new friends at Temple Menorah on Miami Beach...We had moussaka,spanokopita, horiatiki salata, baklava and, yes, ouzo for everyone -- opa!

We are here for a presentation by Dr. Rachel Lapidot (whose parents were from Salonika) on "The Jews of Greece" -- indeed her talk is about the Jews of Salonika, who have been there since the 2nd Century.

At one point, 70 percent of the population was Jewish, with about 60 synagogues representing Jews from Spain, Portugal and France and elsewhere who spoke mostly Ladino. On Shabbat, the stores and the port were closed. In 1920, in the exchange of populations with Turkey, a multitude of Greeks came to Salonika changing the balance forever. Then, of course, WWII and the Holocaust. Now just a handful of Jews remain comparatively.


﻿﻿﻿﻿﻿﻿﻿﻿﻿I stood up to say that I had lived in Salonika for 10 years, when I knew Jews who were hidden and survived. And, I was proud to further say, knew Greeks who saved them from transport to Auschwitz. There is a Jewish museum in Athens. ﻿﻿
A woman at my table has a brother who bought a house in Hydra around 1960. I also met Silvia Lehrer whose parents were from Kastoria, and who described her family as a minority within a minority because they were from the boonies; she's a food writer from New York, and we will exchange recipes. Last but not least, I met Matt Frances (and wife Zora) who was actually born in Larissa! ﻿﻿﻿﻿

Sent from my Verizon Wireless BlackBerry