What goes around, comes around...

Last week, the 3rd AFS Girls School Reunion took place at the Asylo Paidiou ("Children's Refuge") on a chilly Sunday morning. No one seemed to mind that we had to cram into the dining hall instead of sitting outside, since we were back on our old stomping grounds. The Girls School complex had became a campus of the Asylo Paidiou (asylopaidiou.gr) in 1978 after a destructive earthquake hit downtown Thessaloniki. It was summer, and they needed a place to bring the children. Thus our beloved school -- where I worked for many years -- ceased to exist as such. But the main building and the spirit of the place live on.


Last year we took a leap of faith and approached the ED of the Asylo Paidiou -- a non-profit with a variety of children's educational programs -- ‎about having a picnic there on a Sunday afternoon so that the Girls School grads could revisit their many good memories. The response? Wonderful idea, we will put out tables and welcome you with open arms. And they have done just that, 2 years running. 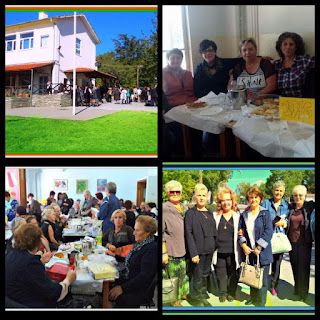 The grads are now organized into a sorority of sorts ("Syndesmos Kakavinon") whose purpose is to reconnect the 275 or so "girls" who attended the home economics/handicrafts Girls School from 1967-78. Most have now come to at least one reunion, even some who attended for only one year! And all have the updated contact info of their classmates -- spawning smaller gatherings and coffee klatches, plus a whole lot of telephone talk. They even have their own (secret) Facebook page.
We have also reconnected with women who attended the original Girls School on those premises as run by the Quakers from 1945-1967.  Six reunion attendees graduated in 1947, 1948, and 1950.  They first came to the School during an ugly Civil War to live away from home in wooden barracks that had been built by the Germans to house the staff of American Farm School during WWII. What an honor to meet those enthusiastic women!

Moving forward, the Girls School grads have been invited to come again...and there are preliminary plans for a next reunion in 2019, when Asylo Paidiou will be celebrating 100 years of public service.  We want to continue our relationship with that special place, whose spirit is so much like that of the Girls School. Even as a department of the American Farm School, we were located on a separate campus which created a special bond and family feeling. Walking through the halls now, you can sense the same feeling.

Indeed, some Girls School grads will be donating items for Asylo Paidiou's big fund-raising "bazaar" November 25-26. They want to be more involved‎ with helping those children, especially during the (dratted) financial crisis. It's a beautiful thing.

What goes around, comes around.

PS: The reunion program included a drawing for 14 prizes donated from businesses owned by grads -- from hotel stays in Halkidiki to a hand-painted icon -- for the benefit of the Asylo Paidiou.  We raised 634 EU ($752) to go along with our heartfelt thanks for making us feel right at home.