There are many ways to resist 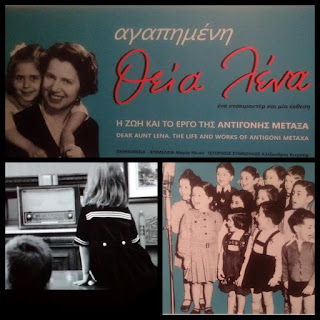 NOTE: Last week I visited the Benaki Museum in Athens and came upon a "Dear Thea Lena" exhibit and documentary film -- learning for the first time about "one of those heroic feminine figures that lifted Greece on their shoulders." The 90-minute film was lovingly directed by her grand-daughter, Maria Iliou. (See photo)
Once upon a time, there was a Greek actress named Antigoni Metaxa. She created a children's theater in the 30's and later focused on radio broadcasts during the German Occupation. She was more educator than actress.‎ Her much-anticipated presence in so many homes throughout Greece caused her to change her name to Thea Lena.
Thea Lena's radio programs were not censored because they were aimed at children. Children who were truly lifted up at a time when they would literally encounter dead bodies in the streets whenever they went out. An English naval barricade to deter a plundering German army helped deprive Greeks of food supplies. 40,000 civilians died in Athens alone from starvation.
By 1950 over a million kids were listening to her programs. And sacks of letters addressed to Thea Lena arrived at her home every day. Over 35 years, she produced 3500 radio broadcasts with the help of her dear husband Kostas Kostiras and fellow artists. She went on to create a children's magazine, make recordings, write 50 books plus a childrens' encyclopedia, and finally produce for television before her death in 1971. People were amazed at her dedication and output .
Most importantly, Thea Lena's broadcasts ‎did not just entertain. Children were taught important lessons. And made proud of their national identity and the Greek culture. Thea Lena's forward-looking work "projected a spirit of resistance" in the harshest of times. She is remebered by so many with love and gratitude to this very day. And rightly so.
Yes, indeed. There are many ways to resist.
Sent from my BlackBerry 10 smartphone on the Verizon Wireless 4G LTE network.

Spent a very pleasant weekend in Thessaloniki after 3 weeks with a lingering cold here in Naousa. Met up with a number of Farm School "boys and girls,"  and we danced up a storm in a Kato Toumba taverna. On Sunday morning I went to nearby Aghio Theraponta church where I knew I would find 3 Girls School grads‎. A year ago, those women did NOT realize that they lived about 5 blocks from each other! 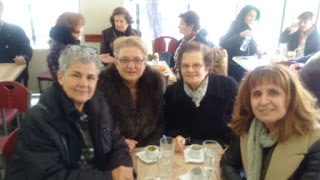 Sunday morning is Ladies' day out -- go to church, hangout afterwards with your cronies, drink coffee and talk. The midday meal might have been prepared the night before...Our conversation came around to whether men or women contribute more to family life...and this a few days before International Women's Day, which is actually celebrated in Greece. (Some amazing Women's Day soiree videos were circulated on Facebook by my cousin Froso from the village of Kyparissi, Lakonias.)

Opinions at our coffee klatch ranged from women being discriminated against to "what does the Bible say?" At my folk dance class yesterday, the teacher said "Many Years" to the women and a man then asked when is Men's Day. "Every other day," shot back one of the ladies in half jest. Indeed, men in Greece earn 1.75 Euros for every Euro a woman earns. Sound familiar?

During Sunday lunch with other friends, talk turned more than ever before to hardships people here face. Because there have been 3 "Memorandums" signed so far with The Creditors, I mistakenly though pensions had been cut 3 times. In fact, they have been cut 10-11 times -- "who can keep track," I was told -- while taxes and fees have risen in order to meet the $$$ goals prescribed by the European Union. Half of all Greeks are living below the poverty line, and many cannot pay utility bills. One woman from Larissa talked about people in her neighborhood having their electricity cut off, while another said that in her town there is group of electricians that goes around illegally reconnecting such for people with babies or senior citizens w/oxygen machines or others who desperately needed some form of heat during one of the coldest winters around here in 50 years. Can they not?

What about the woman who works in a department store, which was once a chain of 8 stores in Thessaloniki with 475 employees? Now there are 18 employees who are not being paid regularly, as people aren't shopping or are buying cheap clothes from the weekly outdoor markets. The employer has to scrape up money to pay for electricity, etc., and I saw those pictures of employees wearing coats in the store. Occasionally the salespeople are allowed to divide up what's in the cash registers at the end of the day, providing 80-100 Euros for each of them.

Here in Naousa -- a cultured and fairly modern city of 20,000 people -- the big community angst is what will happen to the renown and now deteriorating hospital (once run by my 93-year-old uncle Dr. George Koukoulos). People come from all around to see our cardiologists, orthopedic surgeons and ophthalmologists. The government is planning to downgrade the facility to a Health Center with fewer doctors, departments,  and amenities. And there will be no ambulance to go to the hospital in the next town. Double ouch!

While beleaguered Prime Minister Alexis Tsipras tries to put a good face on current very tough talks with The Creditors for the next bailout (and now unavoidable debt relief), the economic suffering of the Greek people simply cannot be overstated. Last time I was here, I kept asking for receipts when shopping so that sellers could not get out of reporting the sales. This time I can really see and feel how bad things are, so I turn a blind eye to the receipt thing with small purchases even though "cheating" will not help fix the business culture in the long run. Go ahead, lock me up!