For the record, I have lived part-time in Greece for the past 3 years, or 18 months out of 36 -- mostly in a rented studio apartment in my father's hometown of Naousa, a traditional yet modern town of about 20,000 people in Central Macedonia about one hour northwest of Thessaloniki. From there I have visited a number of Girls School/American Farm School grads in their villages around Northern Greece and beyond. In September I spent 5 days in Cyprus. You have read many of my "Dispatches from Greece"* -- so you won't be surprised that I have mixed feelings about the Greek reality as we gear up for the New Year. Let's call it a glass half full at best. 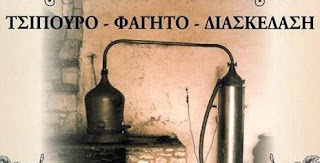 Naouseans are preparing for the holidays enthusiastically just like you and me. Christmas decorations have filled store windows for weeks. "Kazania" -- the traditional boiling of grape skins to produce stronger than ouzo tsipouro (together with a requisite on-site party) -- continued well into November.  Religious and other holidays are surrounded by name days, concerts, seminars, organizational events (like those hosted by the Pontian or Vlach Associations) and pretty much any excuse for a party. Education may be king, but skiing is now in ascendance after the first big snows at 3-5 Pigadia. Naousa also has admirable programs for the elderly, people with special needs and families who need assistance. And on the weekend of December 7-9, she becomes the "City of Wine" celebrating the renown Xinomavro grape. Opa!


The devastating economic situation, however, has not exactly gone away despite published reports to the contrary.  Unemployment may be down, but that's from 28% to 20.8 %.  And "the brain drain" continues, over half a million people having left the country since 2008. You may not realize that the now extended Russian embargo of EU food products in retaliation for sanctions has taken it serious toll on exports of meat, fish/seafood, vegetables, fruit (especially in Naousa!) and dairy products. 35% of all Greeks live in poverty or close to it...


On August 20th Greece officially exited the bailout program, but at what price? After 3 "Mnimonia" (memoranda of virtual servitude to the European Union) and pursuant demands for privatization, Greece has sold control of the Port of Piraeus (China), 14 airports (Germany), and a railway system (Italy). Greeks -- including me! -- pay the most for electricity in Europe, 42% in taxes and fees. Heating oil is more expensive this year with record snows predicted for year's end, so how will 60K refugees living in "hotspots" fare? Official reports may peg the average monthly income at 1000 euros, but too many people live on about 400 euros due to severely reduced pensions or part-time jobs.  Things are happening, investments are being made, but the reported turnaround has simply not yet trickled down to the average Greek citizen.


Pensions are scheduled to be cut one last time in a few weeks per Greece's contract with the banks. For awhile the Tsipras government said it wasn't going to happen, but the Lenders came back with, "Not so fast, a deal is a deal." May 19th elections are looming on the horizon, so those last bailout bits have become predictable political footballs. The Syriza government -- which has dealt with this mess with a proverbial gun to its head for 4 years -- is down in the polls by double digits to the New Democracy Party which helped create the disaster in the first place. Who should Greeks trust? (And most basically trust no one.) 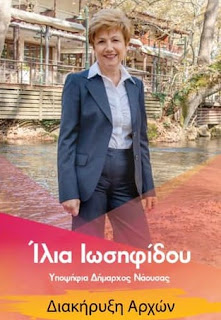 On the bright side there is a woman running for mayor of Naousa, which has never put a woman in charge. Ilia Iosifidou is a civil engineer and mother, who is smart and energetic in the face of 4 male opponents. For some time I have been asking, "When will Naousa have a woman mayor?" After years of uninspired leadership, Naouseans now have a chance to elect a woman who seems to embody transparency and hard work over grandstanding and unfulfilled promises.


Will Greece really turns the page in 2019? Greeks have swallowed a lot of very bitter medicine no matter what we think about the historic economic meltdown. They now deserve our very best wishes for a Happy, Healthy, and Prosperous New Year.  Kali hronia, to you and yours, too!
Posted by Paula at 5:41 PM No comments: