A bad cold prevented me from traveling to Thessaloniki yesterday for the 6th Annual silent march from downtown Liberty Square to the Old Train Station -- under the banner of  “Never Again: 75 years since the first train departed for the Auschwitz-Birkenau camps” and led by 92-year-old Holocaust survivor Moshe Aelion in his wheel chair.  Marchers laid flowers on the tracks, lit candles and wrote messages on the old train carriages. I was there in spirit.


The Jewish people have been an important part of this corner of the world for centuries, but the German Occupation changed everything. Imagine the horror facing Greek Jews who could not escape deportation. Or that of non-Jews forced to bear witness, some who intervened however they could. When I worked at the American Farm School circa 1968-78, I knew both Jews who had been hidden and those who had hidden them.  Nevertheless, 48,533 (mostly Sephardic) Jews left Salonika for Auschwitz on those trains between March 20 and August 18, 1943. Others arrived to Treblinka and other camps for a total of 54,000. In all, 65,000 Greek Jews perished in the Holocaust. 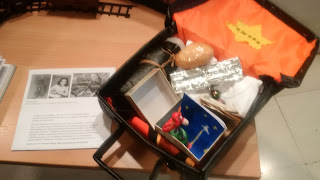 A series of annual events has been established to pay respect to both the Jews who perished and Salonika's  rich Jewish  heritage.  Two years ago,  children from six primary schools in the neighborhoods of that train station were asked to imagine the journey of children who got on those trains, resulting in amazing heart-breaking creations that were later exhibited.  In the words of Mayor Ioannis Boutaris: “The story of the Jewish matter had been swept under the carpet. We decided to gradually showcase the city’s Jewish identity. You cannot build the future if you don’t know the past."


The future will include a Holocaust Museum (to be built over the train station), a metropolitan park with an olive tree planted for every Thessaloniki Jew who perished, and potentially a Jewish School to support the current 1300-4500 member (depending on who's counting) Jewish Community.  Unfortunately this wave of goodwill was marred this past January by the defacing of Thessaloniki's Holocaust Memorial in the name of the ultra-right party Golden Dawn, a group embodying the populist movements sweeping Europe in response to the Syrian refugee crisis and emboldened by the hardships on the Greek people due to the financial crisis. (Should I mention that there are currently 65,000 refugees trapped in Greece?)

The good news is that some Salonika Jews returned home after the war to rebuild their lives --  like the family of Heinz Kounio, owners of a camera store founded 100 years ago. They managed to survive because they spoke German and were put to work in several locations before being rescued in Austria by US forces led by General George Patton. Kounio's is the oldest camera shop in Greece and a tribute to Jewish resilience -- a beautiful and amazing story recently profiled in the Forward. 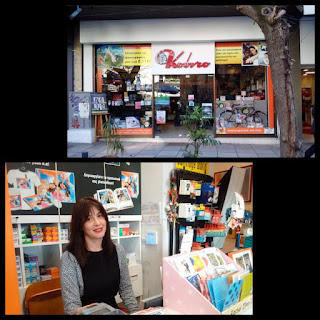 That must-read story rang familiar to me on several levels, as I had once met Flora Lazar Schneider (mother: last name Kounio) whose parents managed to leave Thessaloniki before the war...so two weeks ago I went to 24 Komninon Street. Speaking with Heinz Kounio's granddaughter Nora and looking at the graphics on the wall outlining the store's history, it became evident that this was the place that I had all my Kodak Instamatic photos developed more than 40 years ago. And it was just blocks away from the renowned Molho's Bookstore -- which, unfortunately, no longer exists -- where I picked up a copy of the International Herald Tribune every Saturday. They were simply the best camera store and bookstore in town -- and are now part of a lasting Jewish legacy in Thessaloniki,  aka Salonika.