Back in Greece at last! 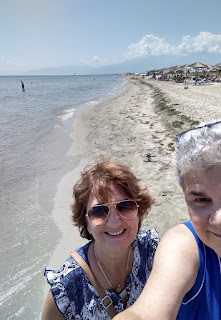 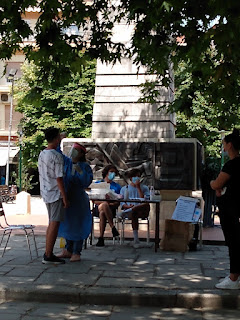 Been back in Naousa for nearly 3 weeks, but locked out of my blog's dashboard. Fortunately, I just discovered a work-around. 🤓
The trip via Lufthansa was thankfully uneventful. And my tiny apt was in excellent shape considering that I last walked out on 12/3/19. After laying low for a few days, I had a negative Rapid Test in the town square and got started reacquainting myself with life in a small town in N. Greece.
Then came a record heatwave, way too hot even for Greece in August and which spawned horrific wildfires -- notably around Ancient Olympia, just outside Athens, and on the island of Evoia.  Most people do not have AC. I invested in a second fan which sounds like a wind tunnel, but helps me sleep and will be easy to store.
Most vexing is the tragic international problem of vaccinated vs. unvaccinated. While "Don't ask, don't tell" is often the path of least resistance, it is no help re staying out of harm's way with the steady uptick in cases. And I have gotten into too many endless arguments. The reality is that Iraklion, Crete, has gone into lockdown for at least a week including the big August 15th religious holiday. I just spent 3 days in Katerini (about 1.5 hours away), where I visited with Girls School grads and even went to the beach. Still the first question re any sort of socializing has to be "have you been vaccinated," a deal-breaker in some cases.
It was not an easy decision to come to Greece now given the multi-layered Covid complications. And that I can stay only 4.5 weeks instead of my usual 3 months. So my first reaction to the paralyzing effect of the heatwave was deep disappointment that it cramped my style...Then I realized that just hanging out, shopping here and there, and just being was good enough -- now with a few select side trips. What was once a faraway memory is now delicious reality, no embellishment needed. That's how much I missed Greek life with all its real and imagined "kousouria" (shortcomings) -- Covid, be damned.
Now about 10 more days to move through my ever-growing ToDo List...opa!
Posted by Paula at 9:51 AM No comments:

Today is March 25th, Greek Independence Day. Normally we go to church ("The Annunciation," with the Tin Ypermaho hymn), then to a patriotic parade of students and groups in traditional costumes, and finally to a feast of fried cod with garlic sauce. Children wave small flags and adults  say "Hronia Polla" on their way to ubiquitous coffee shops. Not this time...


March 25th parades had long been cancelled and even The Church told everyone to stay home.  Greece is on lock-down since Sunday midnight. You can go to essential jobs, the pharmacy/grocery store, the doctor or walk your dog only by permit. So a lot of people probably did not have "bacaliaro me skordalia" on the menu. Instead, "Menoume spiti!" ("We stay home!") was the order of the day. Flags were hung and at noon many people sang the national anthem from their balconies. 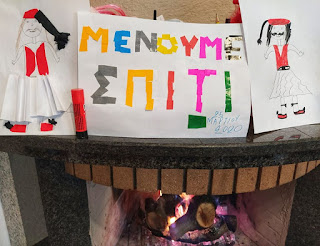 What all Greeks do have is television, where the esteemed Dr. Sotiris Tsodrias gives the daily COVID19 briefing with both guidelines and data. Greece closed schools etc. relatively early in the game, but there is an uptick that has prompted the government to do more...to ensure that Greece does not become Italy or Spain.

Yesterday, the new President of Greece Katerina Sakellaropoulou gave a rare televised address. She underscored the responsibility of each citizen to follow all the guidelines, allayed fears, and sounded the trumpet for what it means to be Greek. Next year Greece will celebrate the 200th Anniversary of the Greek Revolution. 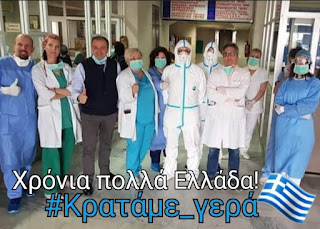 Today's data shows 821 cases and 22 casualties...plus the first case in the county of Imathia where my town of Naousa is located. A 49-year-old who recently returned from a business trip to the US has been hospitalized in Veria. Most Naousa citizens have been staying home since March 13, as have many Greeks. "Menoume spiti" is the new normal.


But I am not there. I did not make it back to Greece after my 90-day exile and before all the border closings. So I can only monitor what's happening via local blogs and by exchanging messages with my friends/relatives. I am thinking especially of those who are older, like my dear friends Voula and Giorgos. And my uncle the germophobe who was at one time Naousa's most esteemed doctor and is now around 95. When I finally return to Naousa, someone I know and love may not be there.


Meanwhile, "Menoume spiti" in Greece and almost everywhere else in the world...even on March 25th.

The weather in Greece was fabulous right up until the end of October, and I took full advantage by going to Kavala for the OXI Day weekend. It was a long-overdue trip to a beautiful city north of Thessaloniki and across from the island of Thassos. (It was also, of course, a chance to meet up with 5 AFS Girls School graduates who live around there.)

There is a lot to see and do in Kavala: Beautiful beaches/marina, remnants of the Roman Via Egnatia, a Byzantine fortress, multiple reminders of the Ottoman occupation (1387-1912), the ferris wheel in Luna Park, and the decadent allure of Iosifidi "kourambiedes" (butter cookies smothered in powdered sugar). The Apostle Paul landed at Kavala on his first journey to Europe.

But it was the Tobacco Museum that really caught my attention.  Once-upon-a-time, Kavala was the center of the tobacco industry in Northern Greece, beginning around 1820. The Municipal Tobacco Warehouse built in 1910 stills stands a few blocks from the museum.  Area production and trading of Basma, a fine oriental variety, reached its peak around 1920.  After  the war years, the Kavala tobacco trade never regained its former importance.


Nevertheless, I remember a succession of tobacco execs who came through the American Farm School circa 1968-78 when I was there. Most of all, I remember villages where producing tobacco was still very much a way of life.  In the summer of '74, I visited my student Maria and her family in the village of Doirani, Kilkis, wondering  exactly how tobacco growers lived and worked. It was a real eye-opener! 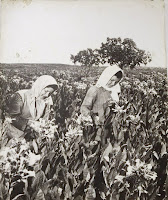 We went to bed early and got up around 4 am to head for the family's fields, riding along a bumpy dirt road in a wooden cart pulled by a donkey. As soon as we could see well enough, we snapped mature leaves off the tobacco plants -- something that can only happen when the stems are firm.  So when the sun came all the way up and the leaves started to sag, picking time was over. Home we went where the leaves were to be strung up to dry. At that point, Yiayia and any other available relative became part of the crew. (Tobacco farming required 100% family participation, which often restricted educational and other pursuits.)

Dried tobacco leaves would later be bundled for market to be further processed -- examined for quality, weighed, sold, and then repackaged according to size and destination -- as exhibited in amazing detail at the Kavala Tobacco Museum.  Tools, machinery, tobacco samples, photos, documents and much more also tell the stories of the people who made it all happen.


The museum showcases an important facet of Greek history and a slice of rural life not to be forgotten. It is definitely well worth a visit.


NOTE: 37% of all Greeks are smokers, the most of any EU country. Only 44% say they have never smoked a cigarette. Every year, approximately 20,000 people die from by tobacco-related diseases. And smoking bans are routinely ignored...
Posted by Paula at 5:19 PM No comments:

The 4th AFS Girls School Reunion took place last Sunday, and I had a blast -- perhaps because I suddenly realized that all the work to make that happen is now basically done...So here indeed is a good story.

In June 2015 I had come to Greece for a 6-week visit, including my first to Northern Greece in over 30 years. I had worked at the AFS/American Farm School in Thessaloniki from 1968 to 1978, bonding especially with the students of the Girls School Dept. (home economics/handicrafts) and their families. The AFS was then a school solely for kids from villages, and visiting the students in their villages was my favorite thing to do during holidays and summer months.

There being no current information at the School in 2015 as to the whereabouts of the women grads, I set out with 2 of them to find the rest. What would they think, would they even remember me? By the time I left, I had visited and/or spoken with 51 of those women. We were all simply overwhelmed with joy at the reconnection -- especially since the Girls School Dept. had been closed in 1978. Wow!

So with the invaluable help of grads already located, I continued to look for all of them -- and thus also initiated my ongoing 3-month/twice-a-year stints in Greece.  In April 2016 we had the first reunion; 120 women attended a veritable festival of reconnection.  Soon thereafter I moved from Thessaloniki to Naousa, a Macedonian city of about 23,000 people one hour NW of Thessaloniki where my father was born and where I still live when in Greece...and where I have lived through a good chunk of the financial crisis.


Over time we have located every one of the 232 women who graduated from the AFS Girls School Dept. (1967-1978), plus others who attended for only one year -- some found after extensive "investigations" (for lack of a better word). Most still live in their Northern Greece villages or have moved to Thessaloniki. 17 are unfortunately deceased. A handful of those who went to Germany to work still live there. 7 live in the US/Canada. Over 50 are on Facebook and members of a secret page where they share info and news. All have been provided with a list of their classmates with current addresses and telephone numbers.

We also connected with the current occupants of what was the Girls School campus, the Asylo Paidiou (a not-for-profit school for 370 kids from pre-school to 6th grade) -- asking to come in during a Sunday when the school was closed to have a picnic on our old stomping grounds.  Picnic? They rolled out the red carpet along with all the tables from the dining room. What great people!

We have now had 3 reunions there, all volunteer-driven...adding to our lists women who attended the original Quaker-run iteration of the Girls School (1945-1967). When they heard about our reunions, they just showed up, and we have been blessed with the presence of women who graduated from the School in 1949-50-51...plus visits by 3 of the younger women now living in the USA. Double wow!

Yes, this is a very good story. The grads of the AFS Girls School Dept. -- who 4 years ago were mostly out-of-touch with each other -- are now in constant contact by phone, at coffee klatches/ tsipouro parties and even field trips. Our Travel Team has gone to Cyprus -- where we met up with AFS guy grads/another amazing get-together -- and will soon be going to Madrid. Triple wow!

The Girls School grads themselves are now charged with organizing a 5th reunion. Meanwhile, I can happily say, "Mission accomplished, onward & upward!"
Posted by Paula at 5:19 AM No comments: