Build it and they will come!

It's no secret that I have been appalled and tortured by the toxic socio-economic situation in Greece. And not much has changed as people here await a new round of "austerity measures" and are further undone by the ongoing refugee crisis. Nevertheless, Greeks who have very little have been giving the shirts off their backs to people who have nothing...What could I possibly do to help my friends without winning the Florida Lottery?

Well, there was something that came to mind while I was in Greece last summer -- when I visited/contacted far more AFS Girls School Department grads than I thought possible, 51 in total. I was overwhelmed by the reception I received, and, more importantly, the joy those women had getting information about their classmates. Pure joy has become a rather rare commodity here.

In Miami, I continued to research the whereabouts of 232 grads (circa 1967-78) with the help of networking classmates and Facebook -- finding 50 more, including one in my own back yard (Naples, Florida). Arriving back in Greece on Valentine's Day, I wondered whether "the girls" would come to a grand reunion of all classes. The Girls School -- a 2-year program -- had closed in 1978, and many of those students had not seen each other in over 40 years! 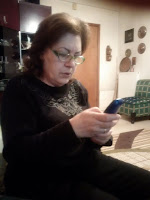 The date was set for Saturday, April 2nd. A restaurant was found to (optimistically) accommodate 100 -135 people. And thus began a seemingly endless round of telephone calls to invite/confirm women whose contact info I had and to ask them to find others either from their villages or nearby towns. Three grads were found by virtue of a card I picked up at a wine exhibit. One was found in Larisa because the son of another was taking bouzouki lessons from her husband. Some classmates live within walking distance of each other here in Thessaloniki and didn't know it. My notebook was a jumble of scribbles and my mind numb. By now I had found about 80% of the living Girls School grads. They were all invited.

And 120 of them came. Most are now grandmothers, but in my eyes have barely changed at all. Soula K. '75 came from Essen, Germany. Four others came from Athens and the islands of Corfu and Halkidha. Two came from Larisa. Many grads came from the Katerini, Veria/Naousa, Pella, Halkidhiki, Kilkis, Serres, and Kavala areas. Eleni P. '70' -- who I did not expect to see -- was driven from Elatohori to Thessaloniki by her beaming son.  Aphrodhiti K. '70 brought me some sweet flowers from her garden outside of Katerini. Despina V. '69 brought  me a religious book with a notation that I need to pay attention to. There were other gifts from those women, but none so precious as the looks in their eyes and the hoopla that ensued when they were reunited with classmates! 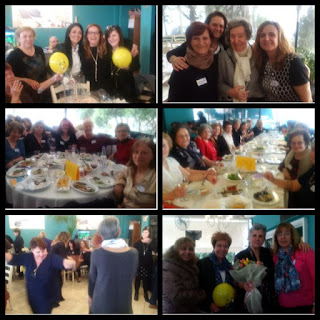 We all reveled in the memories of a special time at the school so many years ago, one woman posting on Facebook: "Today we were all teenagers again." Each grad received a class list with updated contact info so that they can now call each other, meet for coffee, have class get-togethers, and help each other when needed. The beautiful heartfelt bond we have in common had never died.

Then the big reveal! The Girls School property had been sold to a non-profit elementary/nursery school whose students had been housed there in 1978 after an earthquake destroyed their buildings in downtown Thessaloniki. Most of our girls have never been back. I had dropped by to check out what was happening there and with the somewhat far-fetched request for them to let us come in for a picnic some Sunday. That request turned into an invitation to not only have our picnic, but for them to welcome us with open arms -- on Sunday, October 2nd!

So there you have it: A thriving network of Girls School graduates and friends reunited in 2016  -- with much joy, goodwill and energy to build on. Build it, and they will come!